Welcome back to the Week That Was series where for the last year I’ve been highlighting things from the interwebs which I thought were interesting, noteworthy and/or probably worth your time.

I really appreciate the readers who joined me last year. We’ll be doing it all over again this year. The breadth of content will remain along with periodic content from myself.

The death of London-born Daniel Dumile who was better known by his monicker MF DOOM, was announced by his wife on New Years Eve 2020. 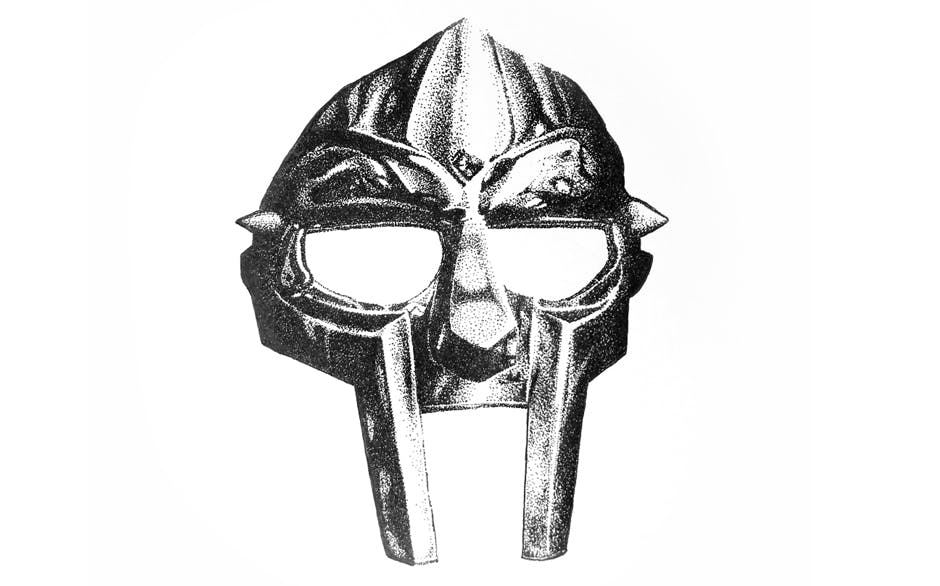 One of US HipHop’s most distinctive, unique and respected MCs and producers - the masked master was a man of mystery with fantastically intricate rhyme schemes and beautifully complex wordplay on all of his projects. The only rapper you could expect lines like:

“One for the money, two for the better green // 3,4-Methylenedioxymethamphetamine”

One of the greatest to hold a mic. Here’s a taste from Vox’s 2016 breakdown of his style (Anthony Fantano had a 📝top 5 lyrics post the same year)

With new all time highs banked and the bulls running, it was notable how little search interest for “Bitcoin” coincided with the run-up ala 2017. A fact we’ve noted before about the large corporate and institutional nature of the inflows relative to the retail-driven bubble last cycle.

The nature of business and popular reportage certainly seems to be changing tenor. 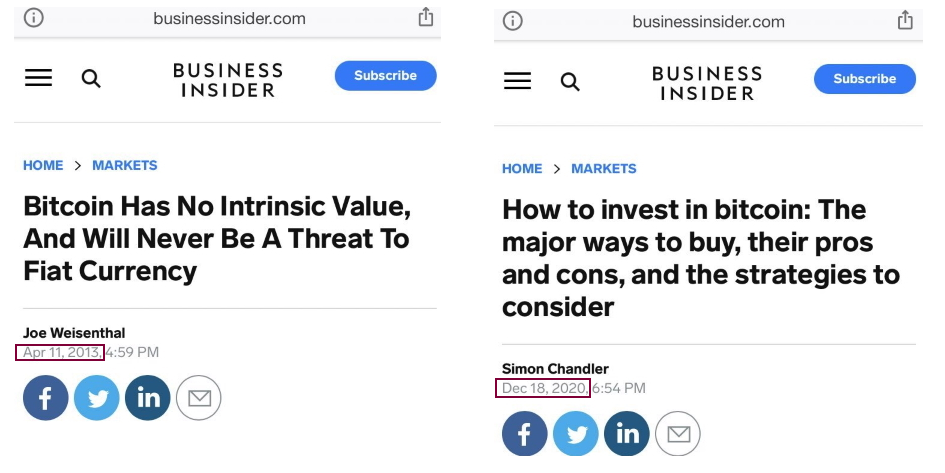 Bitcoin aside, with Ethereum itself also heading back to all time highs, founder 📝Vitalik Buterin pens his end notes on the state of crypto in 2020 and going into the new year.

And so, 2020 is as good a year as any to ponder a key question: how should we re-evaluate our models of the world? What ways of seeing, understanding and reasoning about the world are going to be more useful in the decades to come, and what paths are no longer as valuable? What paths did we not see before that were valuable all along? In this post, I will give some of my own answers, covering far from everything but digging into a few specifics that seem particularly interesting. It’s sometimes hard to tell which of these ideas are a recognition of a changing reality, and which are just myself finally seeing what has always been there; often enough it’s some of both. The answers to these questions have a deep relevance both to the crypto space that I call home as well as to the wider world.

DeepMind are on a roll, after their recent groundbreaking announcement of AlphaFold and that program’s potential implications in protein-folding and medicine. 📝They announced yet another significant milestone on the general-purpose / general-intelligence path in MuZero. 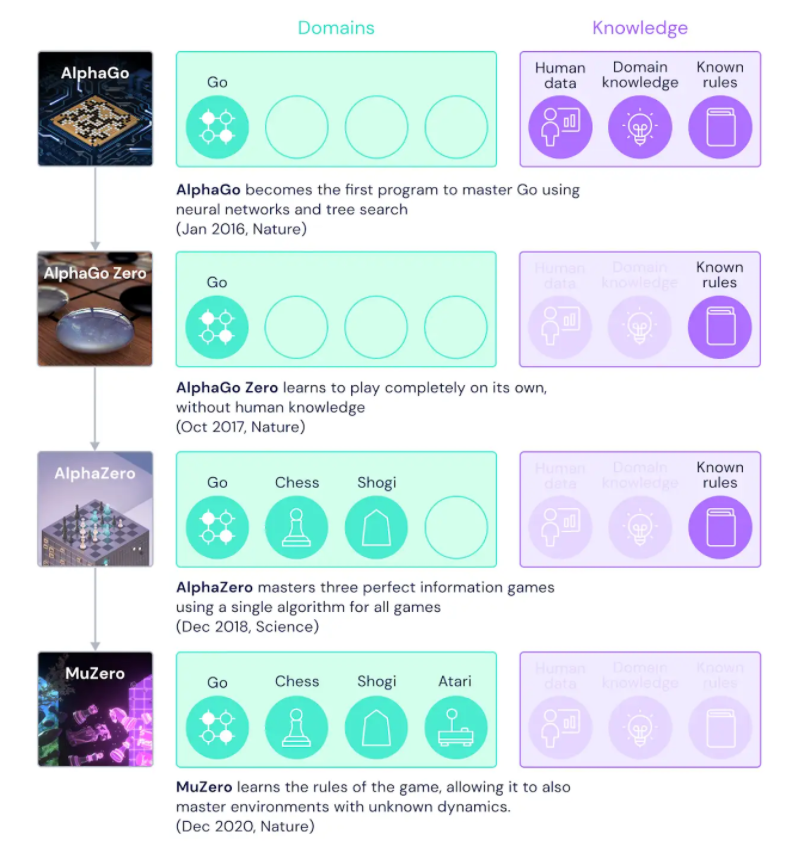 In 2016, we introduced AlphaGo, the first artificial intelligence (AI) program to defeat humans at the ancient game of Go. Two years later, its successor - AlphaZero - learned from scratch to master Go, chess and shogi. Now, in a paper in the journal Nature, we describe MuZero, a significant step forward in the pursuit of general-purpose algorithms. MuZero masters Go, chess, shogi and Atari without needing to be told the rules, thanks to its ability to plan winning strategies in unknown environments.

Julian Schrittwieser did a high level description of the algorithm 📝here.

This is a story about a television title sequence, and about me, as a child, watching it. It’s also a warning about how YouTube won’t last forever, and it’s the reason I’m climbing one particular hill in the Lake District. Merry Christmas, Denis Norden.

“Today’s information age is only possible thanks to the groundbreaking work of a lone genius.”

📝Great profile by Quanta Magazine on how Claude Shannon invented the Future.

Science seeks the basic laws of nature. Mathematics searches for new theorems to build upon the old. Engineering builds systems to solve human needs. The three disciplines are interdependent but distinct. Very rarely does one individual simultaneously make central contributions to all three — but Claude Shannon was a rare individual. 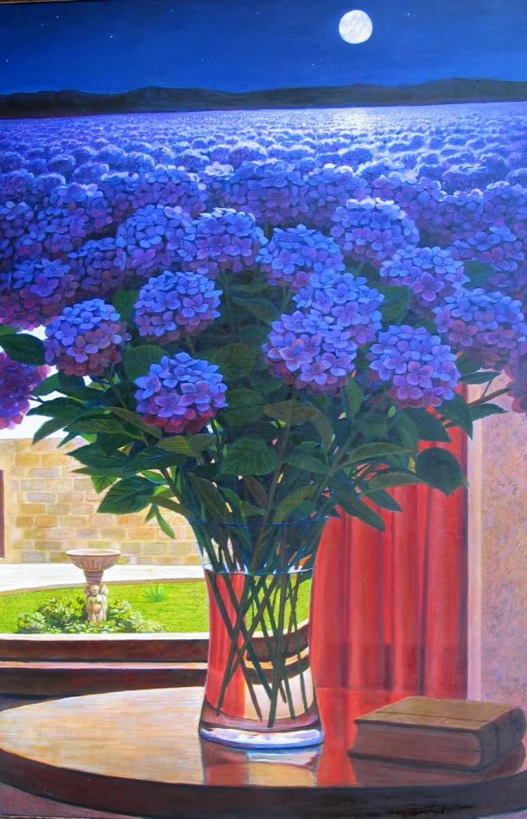 Always notable when an ex-Director’s comments about UFO’s (regarding the Pentagon’s video release) are this ambigous (😅).

A great conversation covering everything from what working in intelligence taught him about people’s motivations and his ability to synthetize information from disparate sources to the efficacy of personality tests and polygraphs; the impact of modern technology on spycraft; JFK conspiracy theories; why there seemed to be much less foreign interference in the 2020 election than experts predicted; what John le Carré got right about being a spy; why most spies aren’t like James Bond, and much more. 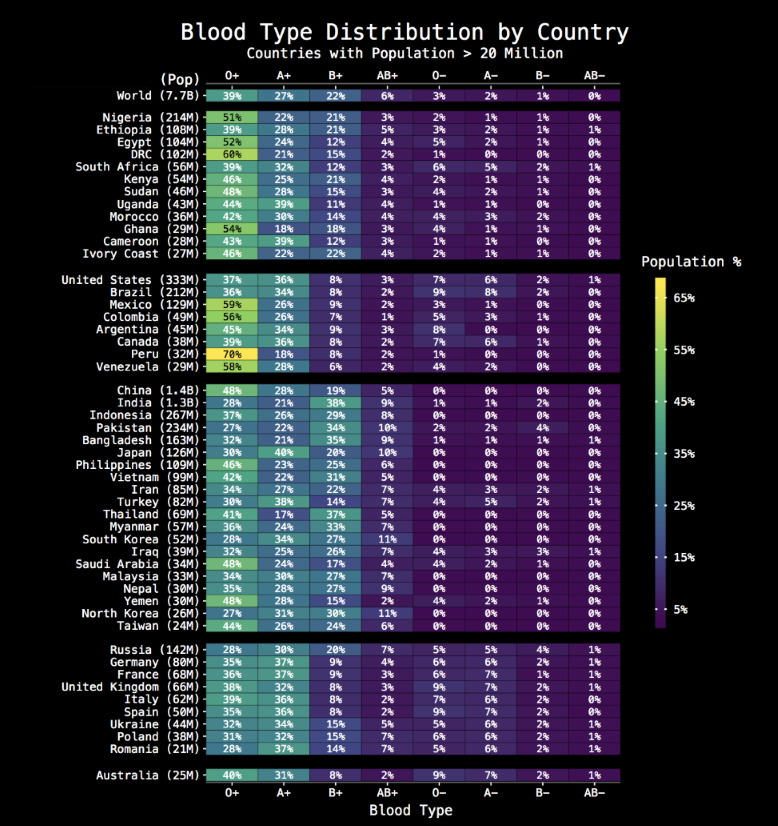 As was predicted by many, the pandemic wrought havoc on progress which was being made across a slew of areas, including 3 critical sustainable development metrics. 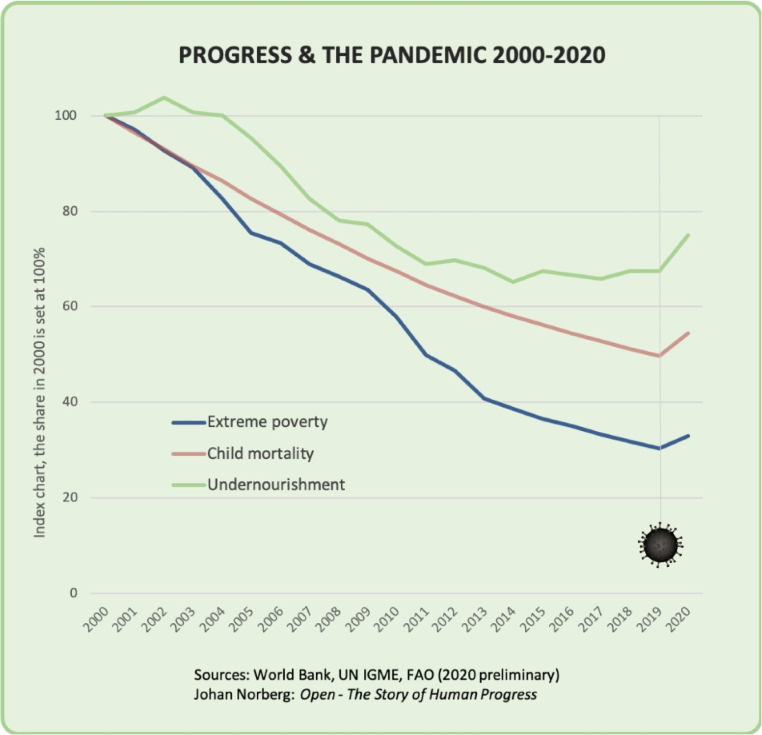 The good news is that vaccines are propagating worldwide (although apparently it’s been frustratingly slow in the US). 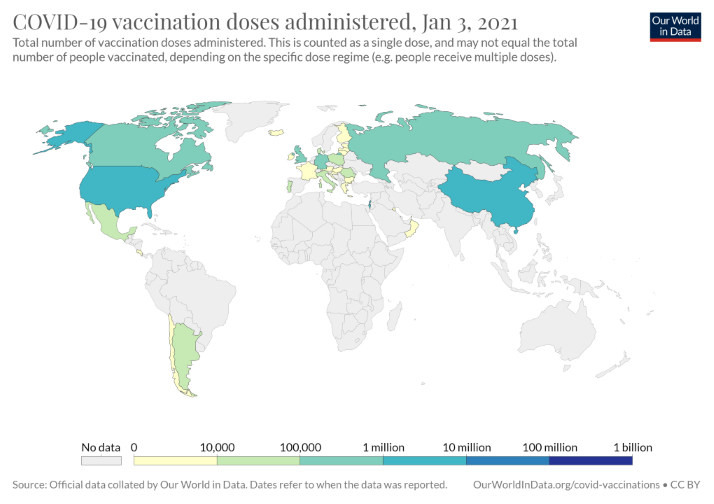 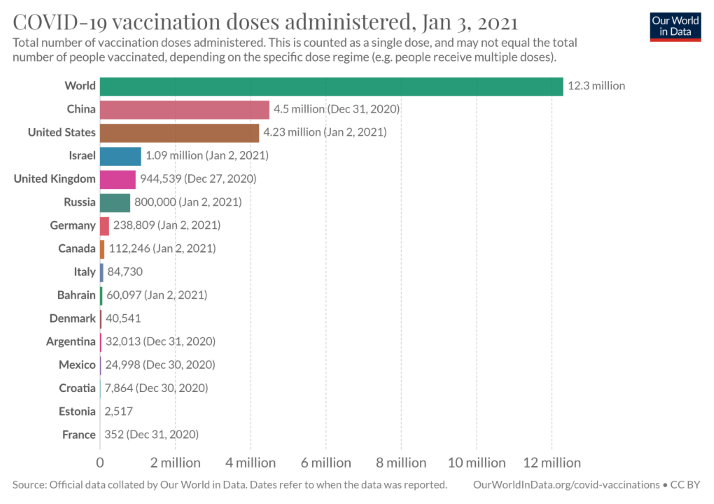 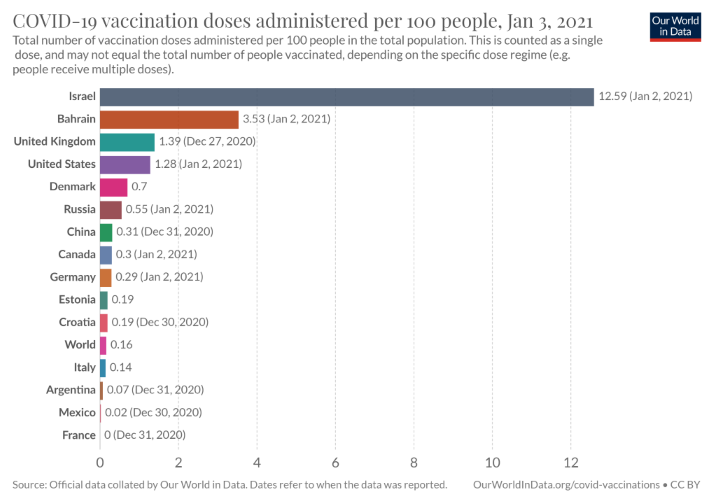 Bill Gates has had, shall we say, an interesting year. His 📝December 22 blog entry was a pretty optimistic look at some key topics of import next year: - How the vaccines work - How to make 5 to 10 billion doses - How to distribute those 5 to 10 billion doses worldwide - Treatment search - Obsolescence of the uncomfortable covid test - How developing countries are doing - COVID, climate, and 2021 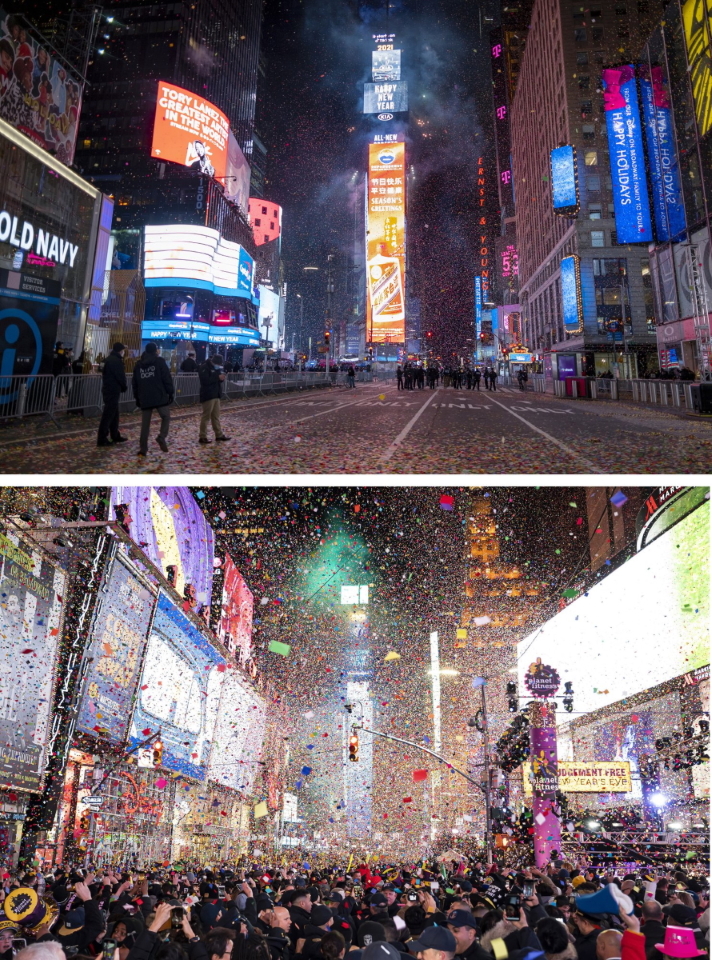 From Mariana Mazzucato’s “The Entrepreneurial State”:

“In fact, there is not a single key technology behind the iPhone that has not been State-funded.”

“During a recent visit to the United States, French President François Mitterrand stopped to tour California’s Silicon Valley, where he hoped to learn more about the ingenuity and entrepreneurial drive that gave birth to so many companies there. Over lunch, Mitterrand listened as Thomas Perkins, a partner in the venture capital fund that started Genentech Inc., extolled the virtues of the risk-taking investors who finance the entrepreneurs. Perkins was cut off by Stanford University Professor Paul Berg, who won a Nobel Prize for work in genetic engineering. He asked, ‘Where were you guys in the ’50s and ’60s when all the funding had to be done in the basic science? Most of the discoveries that have fuelled [the industry] were created back then.’ Henderson and Schrage, in the Washington Post (1984)” 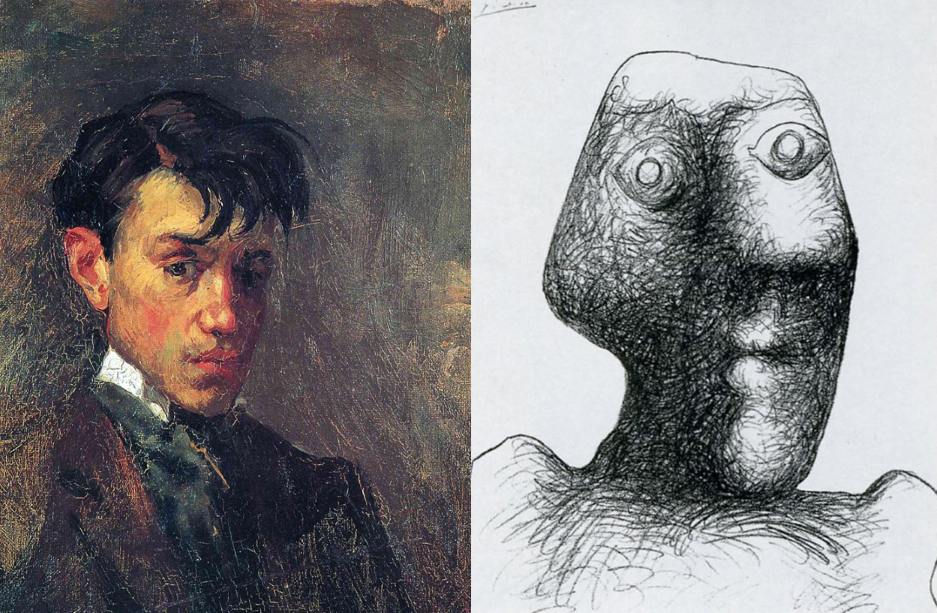 The following 🖌️painting is another reminder of his precocious and prodigious talent.

The painting «First Communion» was created by 15-year-old Picasso on the advice of his father for the Exhibition of Fine Arts in Barcelona in 1896. At that time, Pablo attended La Lonja School of Art. Picasso has never been a devotee or a religionist (at least in the traditional sense of the word). Nevertheless, his 1895-1896 student drawings contain quite a lot of scenes from the life of Jesus and images of saints. The active and ambitious young artist could not help but be interested in means of expression and iconographic schemes used by the great masters of the past: this “food” for his personal creative growth was digested almost beyond recognition and gradually formed the Picasso’s artistic personality. Many years later, the author of many articles and books about the master, Pierre Daix, who knew Picasso more than a quarter century, asked him whether he regretted that he created paintings like «First Communion». And Picasso answered: “No way, back then it was very important for me.” 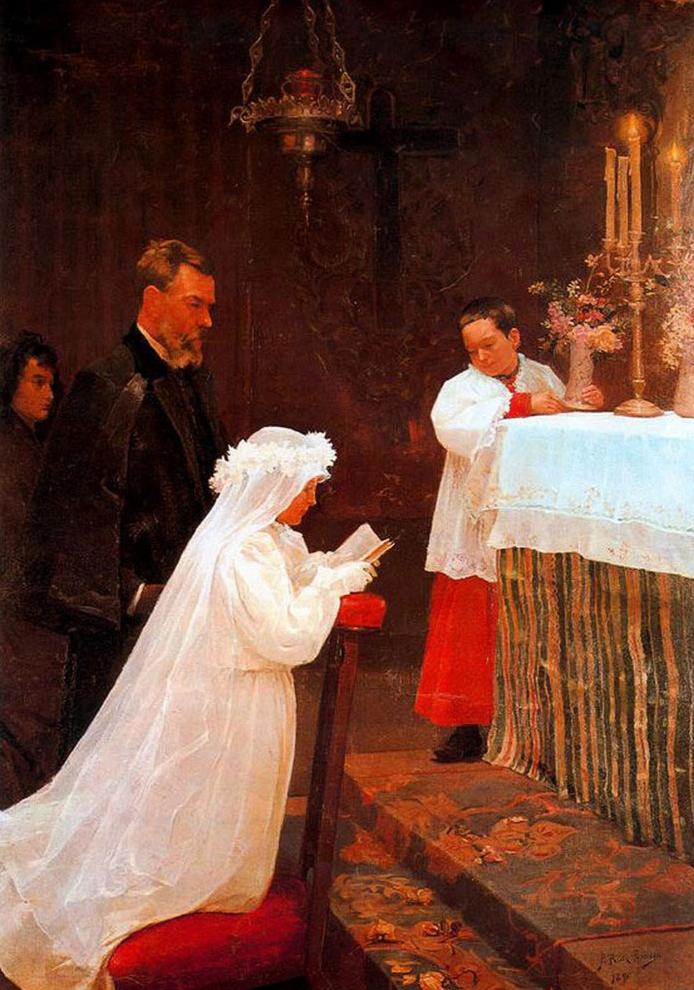