In light of recent Gamestoppy shenanigans, this 2018 NYC protest art by Banksy is trending again 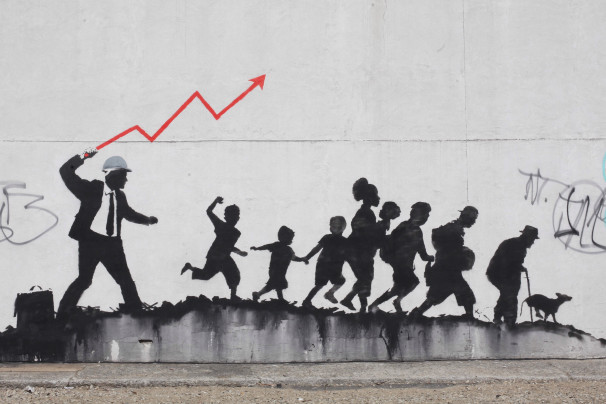 You’ve probably already been completely inundated with Gamestop short-squeeze takes so I’ll avoid pontification. A few updates and tidbits follow below however, although I’d like to draw your attention to a short segment from 🎧Hidden Forces Podcast’s Demetri Kofinas, where he highlights the increasingly divergent market behaviour of Millenials versus Boomers & GenXers. 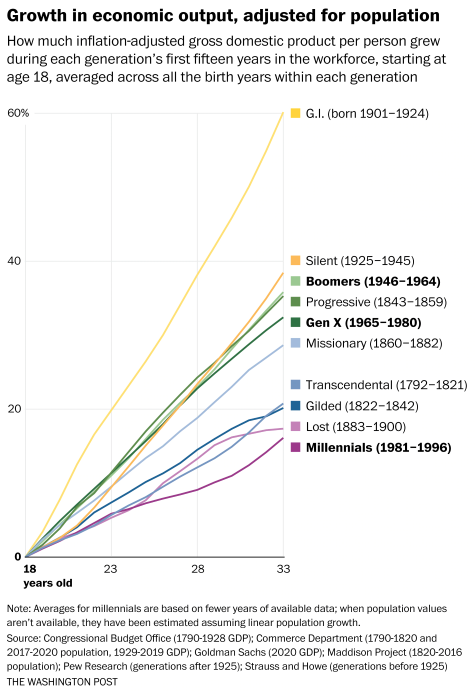 The material differences between this generation and previous ones 📰are truly stark, particularly having lived through 2001, 2008 and now the covid-19 crisis. The attraction to cryptocurrencies and deep institutional distrust evidenced again in the unfolding Gamestop saga are not isolated events; they are evidence of a deepening generational divide which will have continued consequences over the next few decades.

Minutes 5-8 are the relevant ones here

Brief reminder of what happened and the mechanics 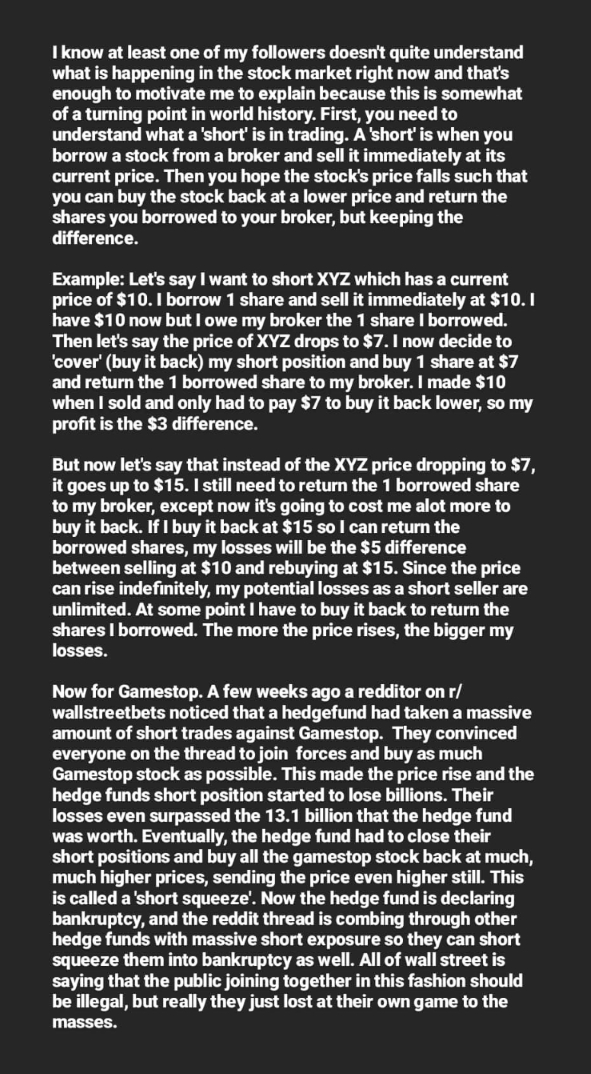 Given his substantial $4 dollar per share $GME purchase way back in April 2020, Michael “Big Short” Burry ended up making away with at least a cool 1,500% return on the investment.

Of course he didn’t lead the merry band of Reddit brothers, that honour fell to Keith Gill, also known as u/DeepF-ingValue on the message board. 🔐WSJ profiled him here

Bad news for the Hedge Fund Melvin Capital which lost 🔐📰53% in January, needing a $2,25Bn cash injection to stem the heavy bleeding (and stay solvent).

Also very bad news for Robinhood who, for various settlement and margin call reasons, had to start restricting trade on various meme stocks, including Gamestop.

The backlash has been… vociferous to say the least. Their app is currently rated one-star

Gamestop joined the pile-on, quoting this resurfaced 2016 tweet in keeping with their name and (then) ethos 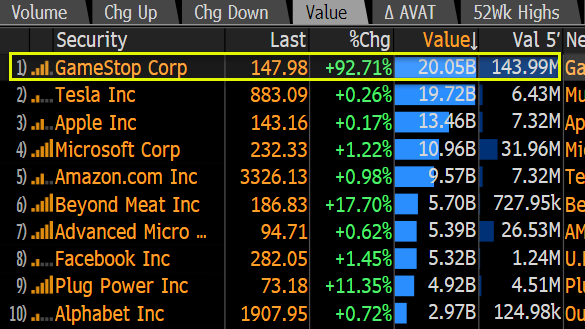 And the meme stock real-world consequences didn’t end there - with AMC having been part of the heavily-shorted set of stocks targeted by r/Wallstreetbets, the covid-19-hit cinema chain appears to have just about staved off bankruptcy for this year. 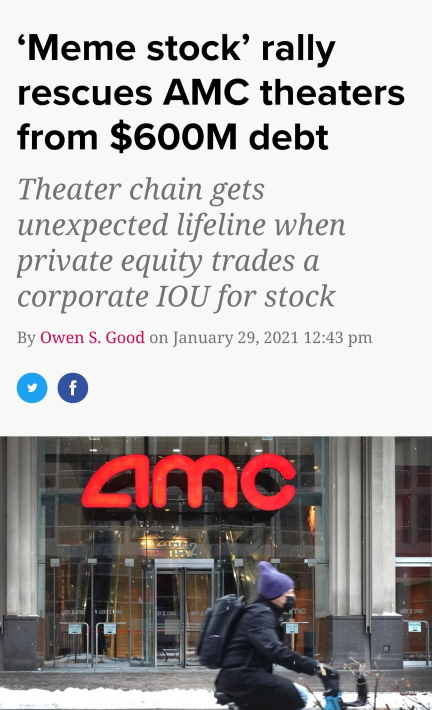 Truly extraordinary times as explored in 📝this writeup by Eliezer Yudkowsky on the unprecedented nature of what the message board is attempting. 📝James Catherwood invokes the Piggly Wiggly short squeeze in a historical lookback at similar underdog speculation.

Who knows what happens next but the meme army appears to have diamond hands and not about ready to quit - irrespective of the potential for catastrophic losses. 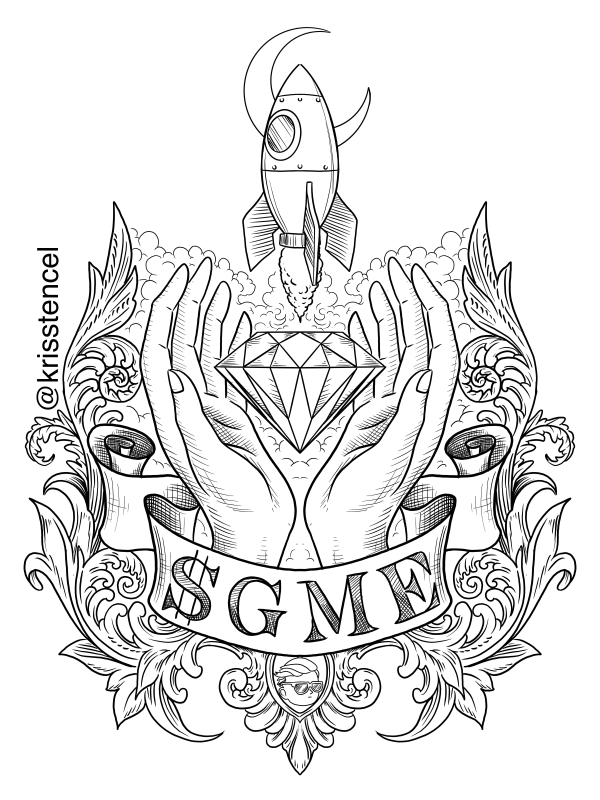 What you may not be aware of is that it took the Boston Dynamics team a year and a half to choreograph and produce the viral content.

🤖 Boston Dynamics spent a year and a half choreographing that viral video of their robots doing the mashed potatoes.

Here’s how they did it https://t.co/cuWkaf4K4I (Video via @quicktake) pic.twitter.com/CuW8cjhOtg

Hyundai 📰took control of the robot maker in a $1,1Bn deal early in December 2020, from Masayoshi Son’s Softbank.

Decentralised Finance hit it’s stride in 2020 with a number of projects maturing, interoperability truly coming to the fore and commensurate spikes in token prices.

A good graphic lifted from Coinbureau’s twitter feed of the Ethereum ecosystem scope. 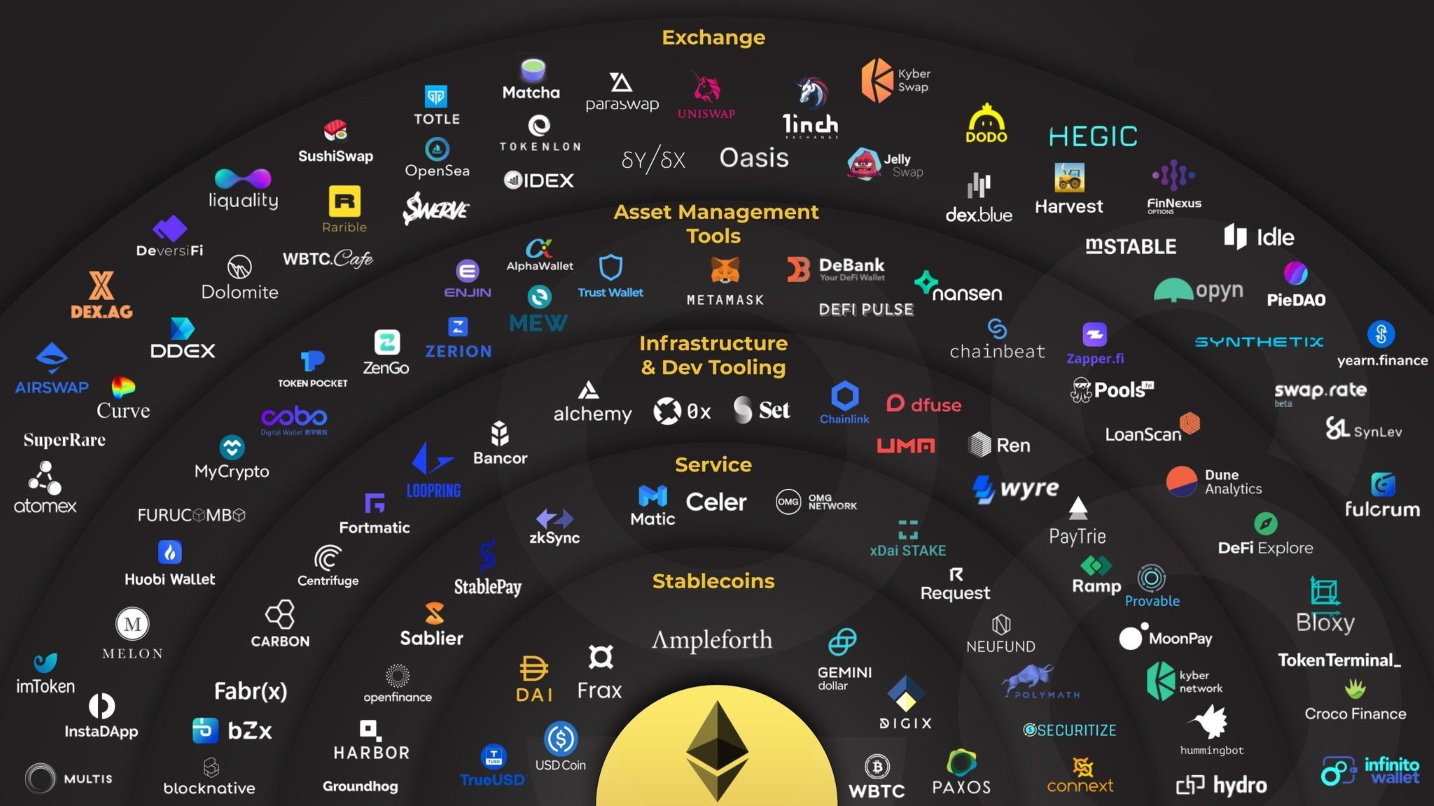 The maturation is not going unnoticed, with the Korean Government Ministry of Science 📘publishing 200+pages report on DeFi.

If you’re a Korean Speaker or have a link summarising the report’s key points please reach out to me - I haven’t managed to track one down as yet.

There is a trend in logo design that started around 2017-2018. It’s as if many companies decided that being unique was a handicap and that it was better to be like everyone else. Or at least, that’s how it feels to me. The trend started with fashion logos. Many iconic fashion companies ditched their recognizable logos and switched to a bland and very similar version of a sans serif font. The technology sector followed soon after.

From Reddit, “Patron saint of women who don’t want to talk to you on public transit” 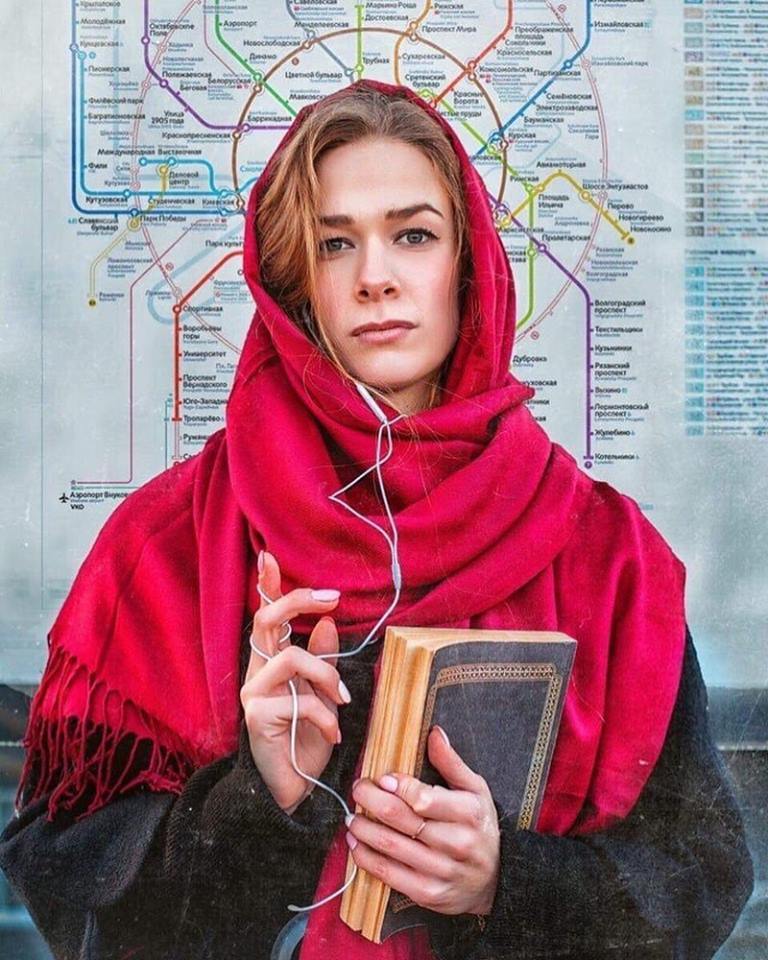 Bannerbear hit $10,000 monthly recurring revenue recently and decided to detail their journey from bootstrapping the startup to reaching this milestone. 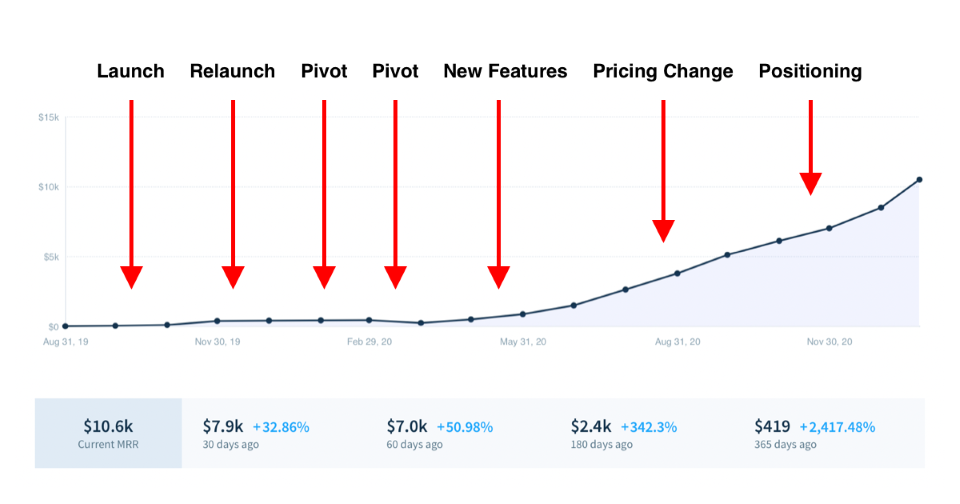 If you’ve read Nassim Nicholas Taleb’s 📚Incerto series, you’ll be familiar with the concept of ergodicity. 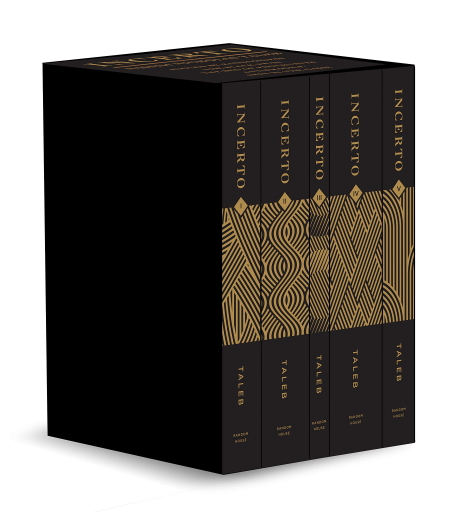 The neurabites blog relooks at the concept in 📝Ergodicity: the most over-looked assumption.

The number of people suffering from flu has plunged by 95% to levels not seen in more than 130 years, 📰per The Times.

A predictable phenomenon given wholesale societal behaviour changes which have dramatically curtailed vectors for aerosol-spread disease. 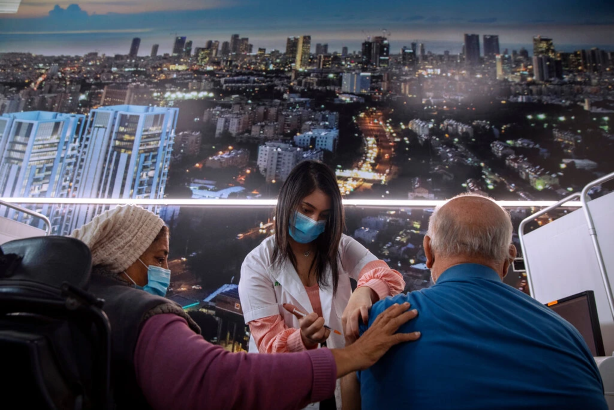 With Israel by far outstripping other nations in vaccine propagation (and aiming to have the majority of it’s nation vaccinated 📰by April) the world is provided the opportunity to scrutinise real-world infection data with the small nation as study group. 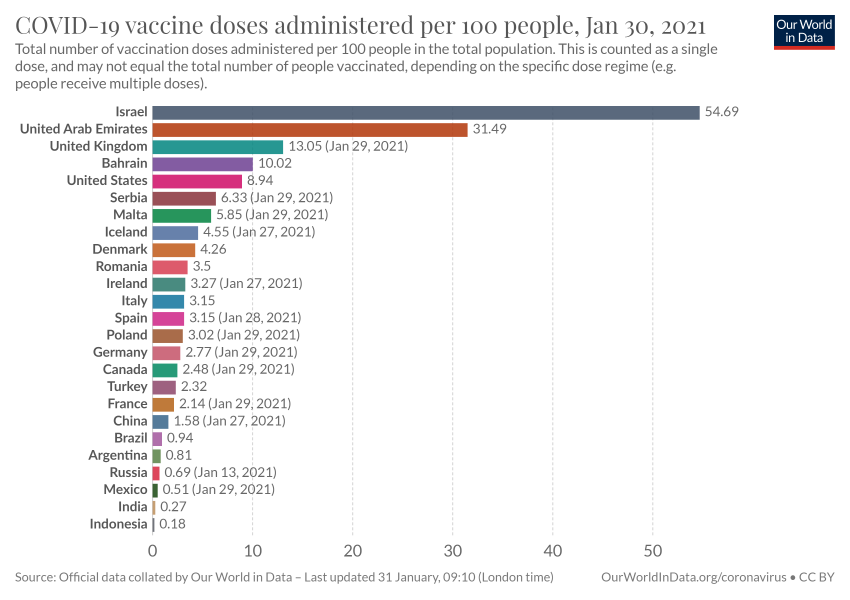 The good news is that initial studies show 📝a significant drop in infections and hospitalizations after just one dose, and very few cases after two. That said caution is being recommended by epidemiologists - given results are preliminary.

Kaitlyn Sadtler, PhD notes how by July 2020 16,8 million people in the US had contracted Covid-19 without and didn’t know it. This again confirms the virus asymptomatically has spread far wider than official statistics indicate.

Kids remote learning during a polio outbreak in the 1940s. Teachers read lessons over the radio 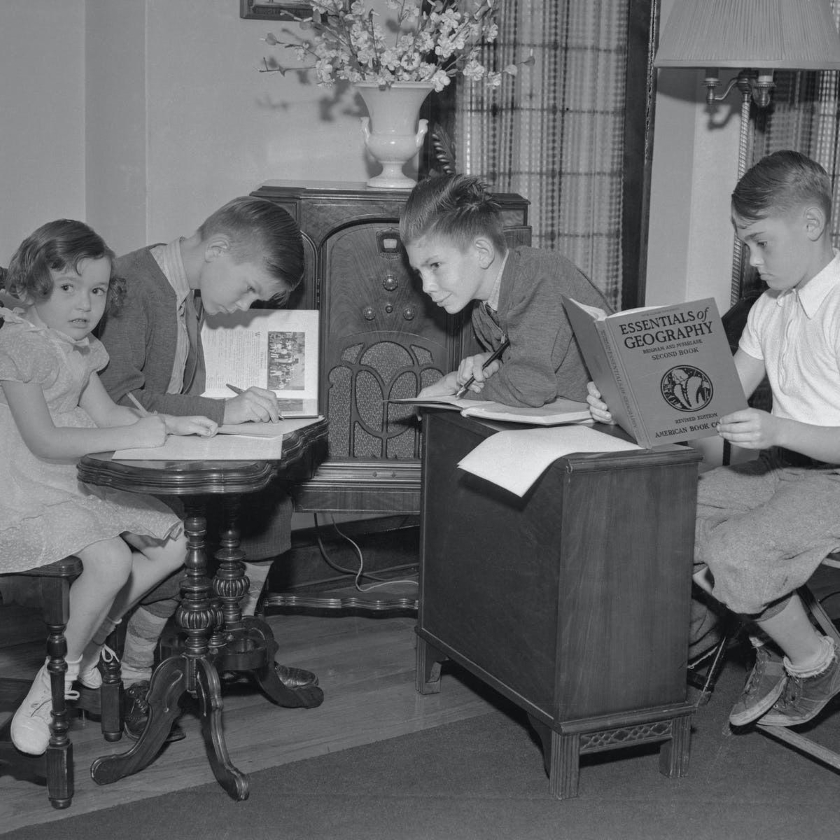 “Things need not have happened to be true. Tales and dreams are the shadow-truths that will endure when mere facts are dust and ashes, and forgot.” ― Neil Gaiman, Dream Country 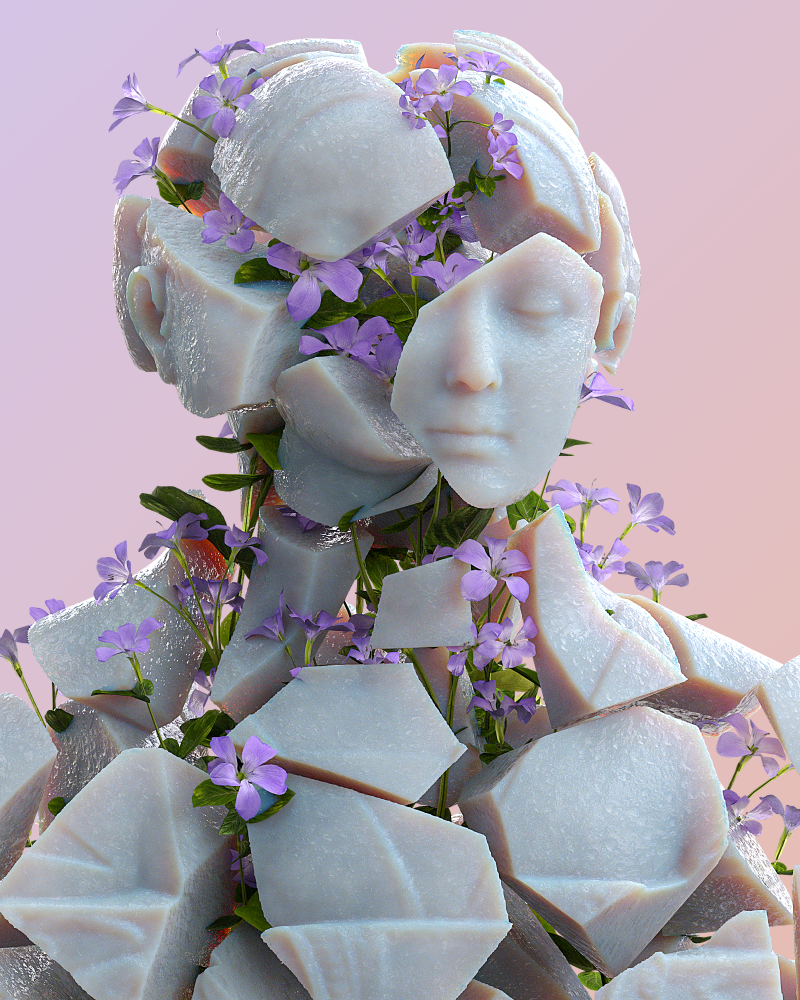 The Arctic 103 years ago compared to today. The photo specifically was taken at Blomstrandbreen. 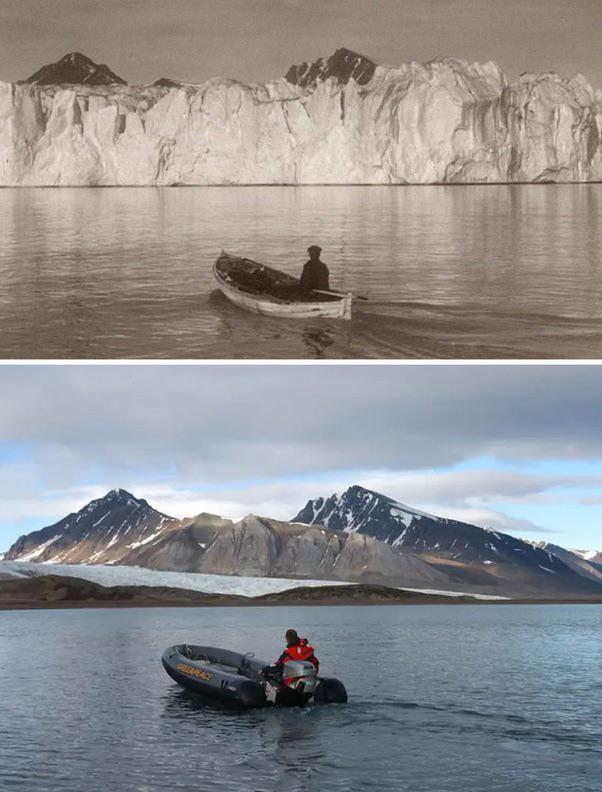 The Adelson's checker shadow illusion is a mesmerizing effect that shows the fallibility of the human vision [read more: https://t.co/VR62ZdHGIP] [source of the gif: https://t.co/aOvkRALqHt] pic.twitter.com/0nAOgSQjJK