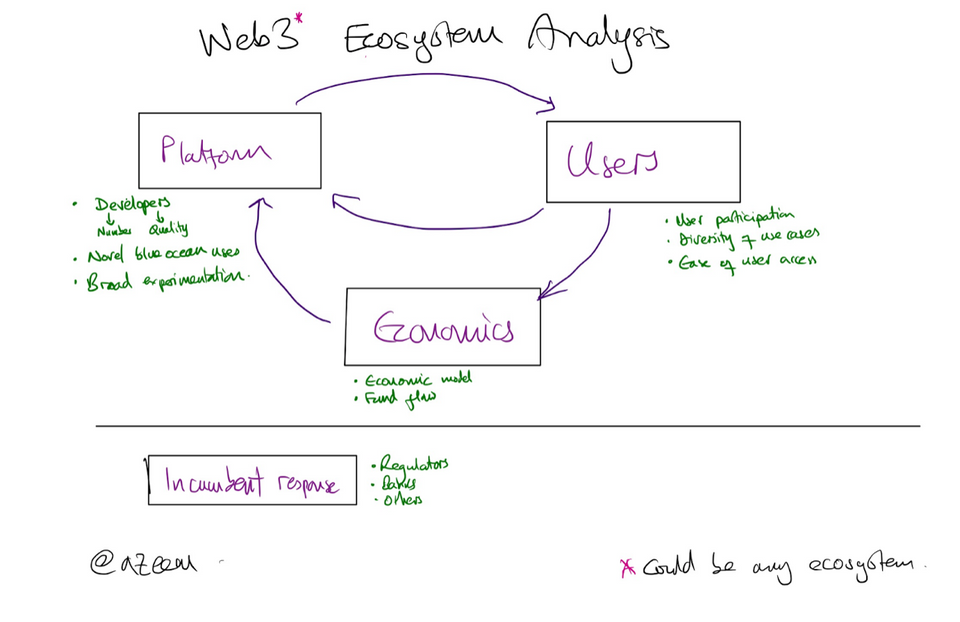 Azeem at ExponentialView had an interesting discussion titled Crypto and the Future of Money (with Terra’s Do Kwon).

Some people see cryptocurrencies as speculative assets with no real utility at best, a Ponzi scam at worst. For others, blockchain-based currencies represent the bright future of the financial system. Do Kwon, founder and CEO of Terraform Labs, the company behind the Terra blockchain, is firmly in the second camp. He and Azeem Azhar discuss the Terra stablecoin and its attendant suite of protocols, the growth of the Terra ecosystem, and how Terra eventually could become the currency of a future lived mostly online. They also discuss: How a “decentralized dollar” could rewrite the rules of finance. Terra’s approach to attracting the general public into the crypto ecosystem. Which future jobs might pay exclusively in crypto.

Whatever your views on the politics of the truckers and protestors in Canada over the last few weeks, the decision of that government first to trigger the Emergency Act and then to start freezing bank accounts, crowdfunding accounts, cancelling insurance and even attempts to control digital asset flows - associated with those donating to protestors (and protestors themselves) - have been fascinating and instructive for those interested in decentralisation and financial independence.

In respect to the Bitcoin, Izabella Kaminska - perhaps somewhat hyperbolically - called it “an M-pesa moment” for the cryptocurrency in 📝this blog post.

Let’s see how that all plays out. What’s increasingly clear though is there is an increasing awareness of the potential of financial repression for antagonistic or unpopular political stances. This increases the utility of decentralised financial infrastructure almost axiomatically.

The next ₿ig thing is here, even if Larry can’t see it.

In 2000, China was the leading source of imports for only a few African countries: Sudan, Gambia, Benin and Djibouti. But as this infographics shows, 20 years later the Asian superpower is now the top supplier of goods for over 30 nations on the continent. 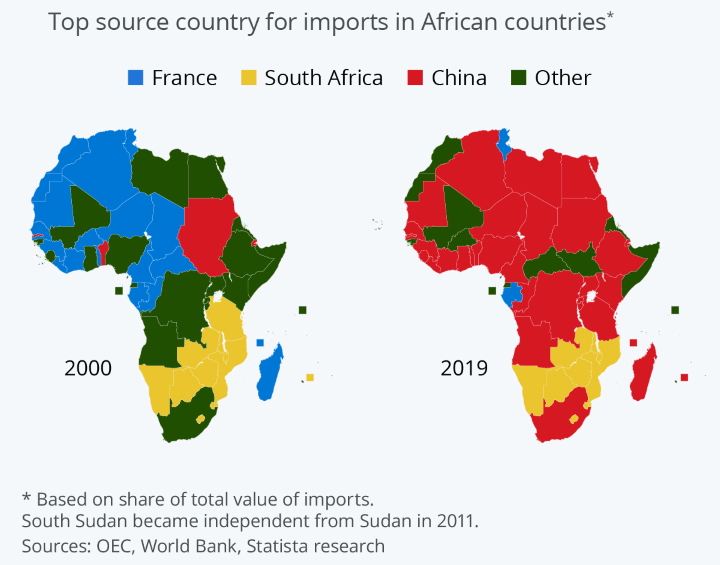 You’ll note there are now new Wordle clones popping up every other day - from 🔢Nerdle, the equation guessing game to ♟️Chessle, the game where you guess the entire opening sequence, for both white and black in a chess game.

Of the clones though I’m enjoying the aplty named 🗺️Worldle, where you try to guess the right country or territory before getting direction and distance clues. 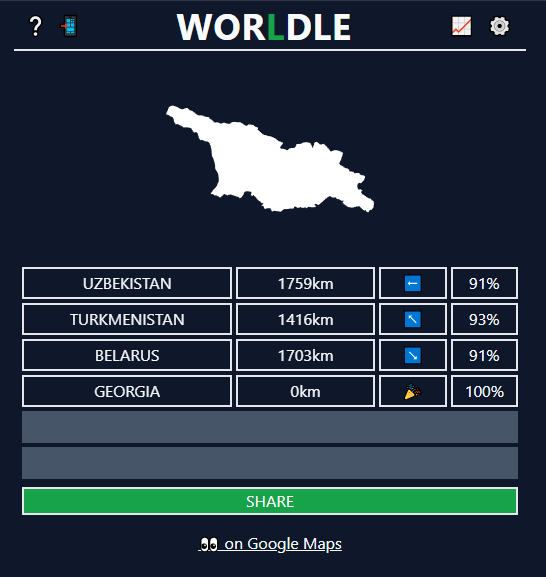 That said 3Blue1Brown issued a correction to his previous Worlde-solver video after he found a bug. He gets into more detail about how the best first word was chosen.

Bain published a report called 📚The Working Future: More Human, Not Less, which has several interesting insights and worth reading through.

A couple of highlights: 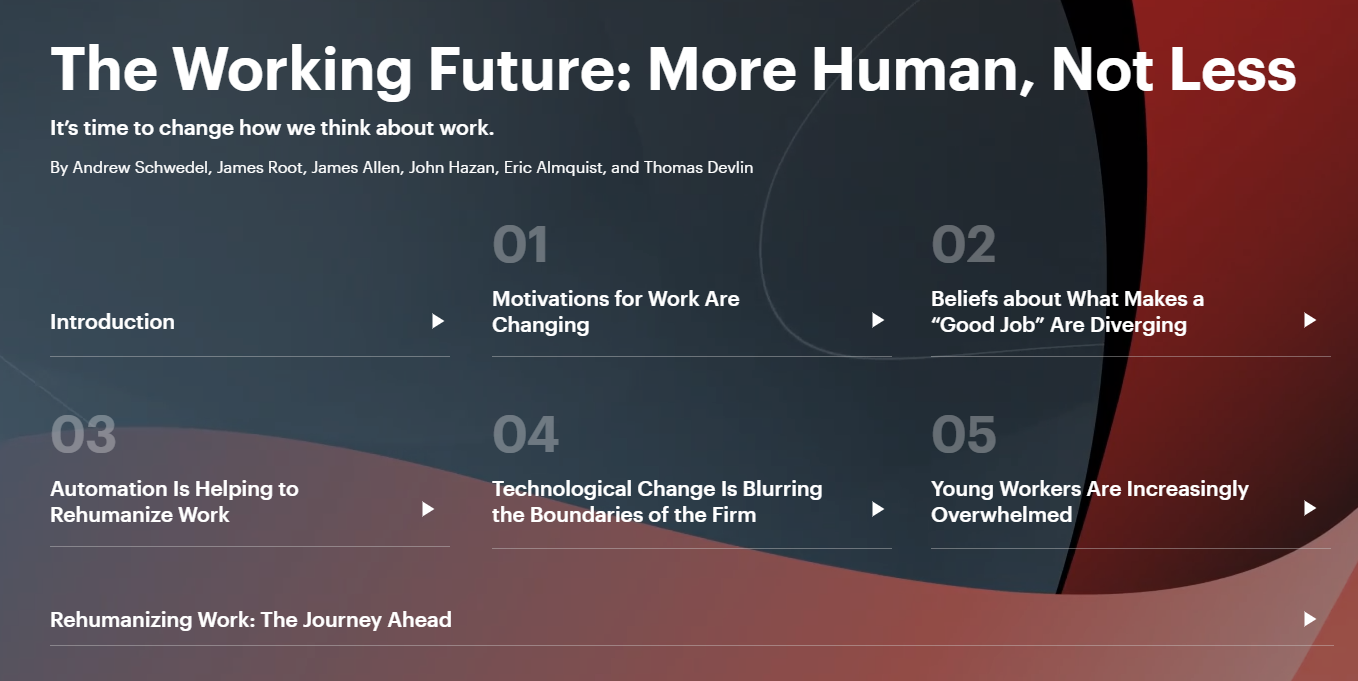 The richer the country the fewer the hours worked 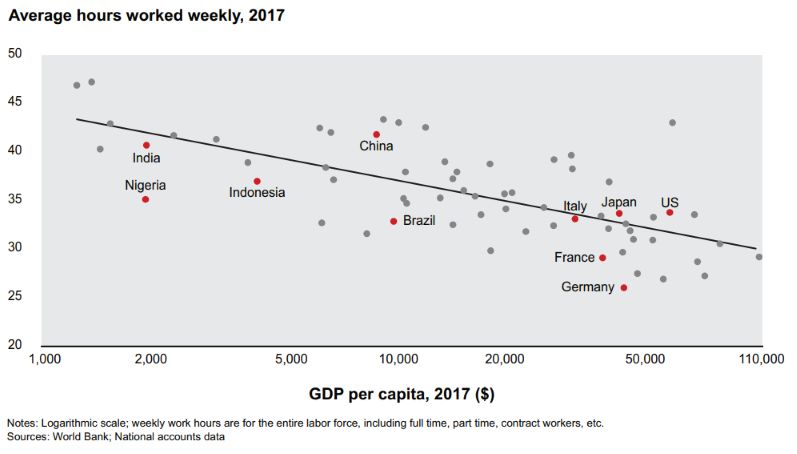 Similarly, the richer the country the more likely the workforce is likely to value more than just money when it comes to work 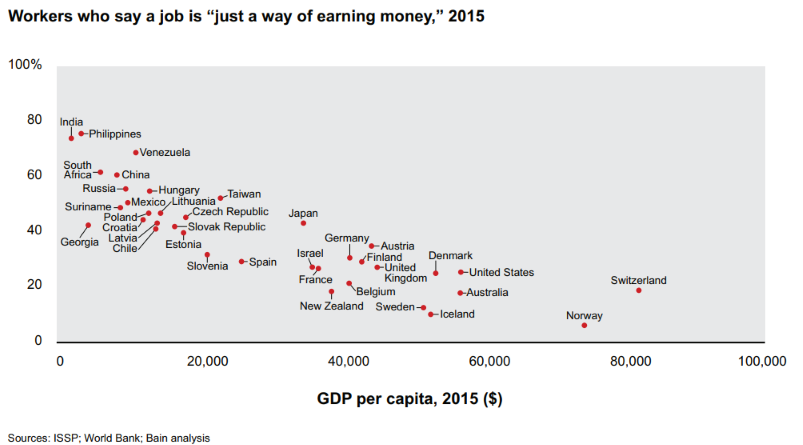 Concerns around automation replacing workers over the last century 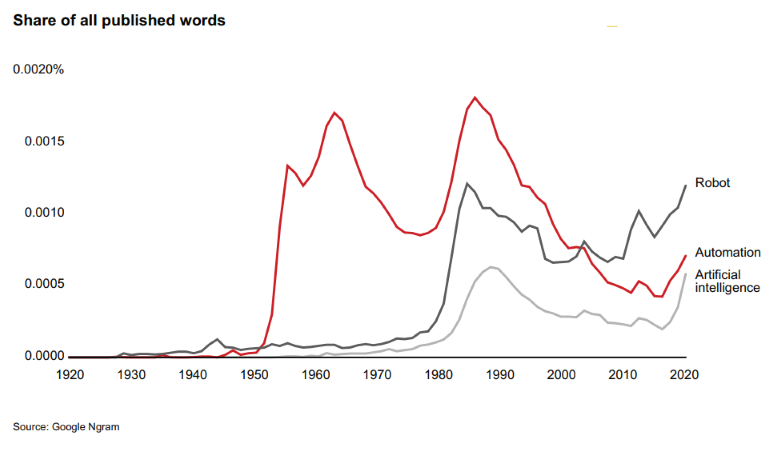 The changing shape of the US workforce since the mid 1800s 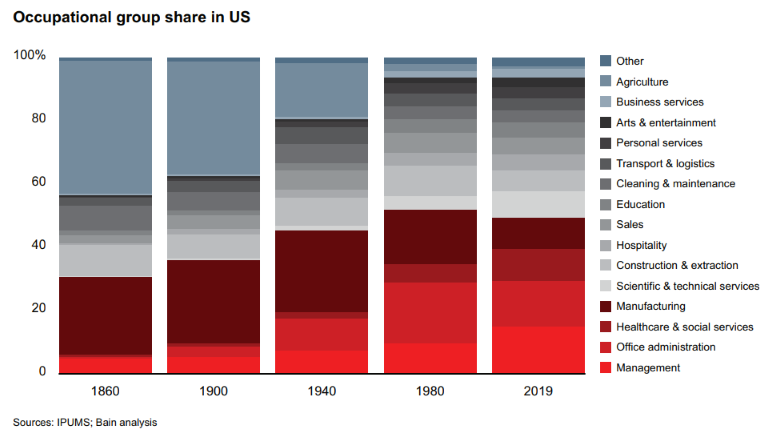 Occupation mix in the US and forecast for 2030 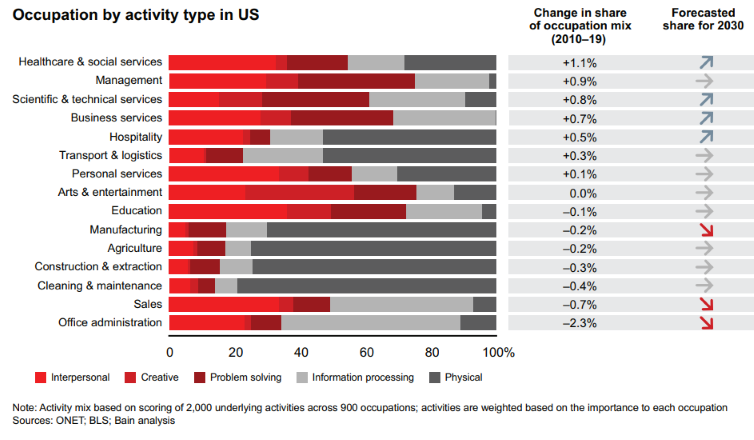 Who is and isn’t actually able to work from home. WFH is very much a white collar phenomenon 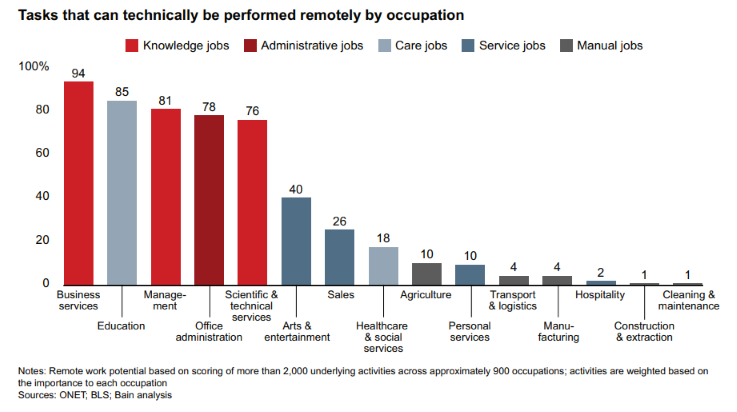 The generational split on feelings of job security and finances

List of 34 universal question intended to make you more conscious of your place in the larger system of your environment. It invites consideration of issues that are often deliberately avoided, such as “where does your garbage go?” and “where does the pollution in your air come from?” as well as data points like tides and moon phases. Best of all is the first on the list: “Point north”

The periodic table of elements scaled to show the actual abundance of the elements on Earth by Prof. Wm. F. Sheehan in 1976. 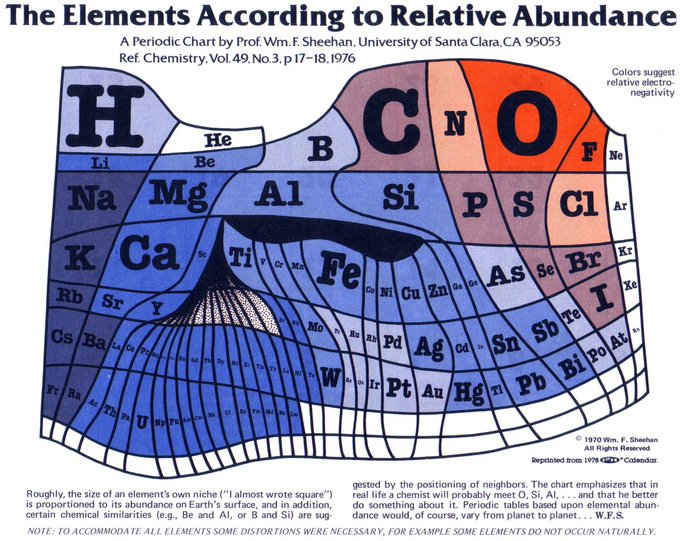 Blurb from back then:

Computerised credit card machines will be able to transfer funds directly from the customer’s account to that of the shop, while computerised banks will see a reduction in queues and less of a need to be tied to branch opening times. However, these developments could also result in job losses as computers take over mundane tasks.

The inimitable (and 📰since demasked) Scott Alexander wrote recently about the danger of relying on rules of thumb - or heuristics - 100% of the time.

He illustrates this via several example stories in a post at his Astral Codex Ten substack (whose tagline is P(A|B) = [P(A)*P(B|A)]/P(B), all the rest is commentary) called Heuristics That Almost Always Work.

He works in a very boring building. It basically never gets robbed. He sits in his security guard booth doing the crossword. Every so often, there’s a noise, and he checks to see if it’s robbers, or just the wind.

It’s the wind. It is always the wind. It’s never robbers. Nobody wants to rob the Pillow Mart in Topeka, Ohio. If a building on average gets robbed once every decade or two, he might go his entire career without ever encountering a real robber.

At some point, he develops a useful heuristic: it he hears a noise, he might as well ignore it and keep on crossing words: it’s just the wind, bro.

This heuristic is right 99.9% of the time, which is pretty good as heuristics go. It saves him a lot of trouble.

The only problem is: he now provides literally no value. He’s excluded by fiat the possibility of ever being useful in any way. He could be losslessly replaced by a rock with the words “THERE ARE NO ROBBERS” on it.

He assesses candidates for a big company. He chooses whoever went to the best college and has the longest experience.

It cannot be denied that the employees he hires are very good. But when he dies, the coroner discovers that his head has a rock saying “HIRE PEOPLE FROM GOOD COLLEGES WITH LOTS OF EXPERIENCE” where his brain should be.

Whenever someone pooh-poohs rationality as unnecessary, or makes fun of rationalists for spending zillions of brain cycles on “obvious” questions, check how they’re making their decisions. 99.9% of the time, it’s Heuristics That Almost Always Works.

How Wikipedia classifies its most commonly referenced sources.

Someone recommended a Bill Wurtz music video the other day called 📹“I’m Scared” and it reminded me of that famous history of the world which he put together a few years ago.

Ended up rewatching it and I just had to post it here. It’s still a quirky 20 minute unique thing of great infotainment. 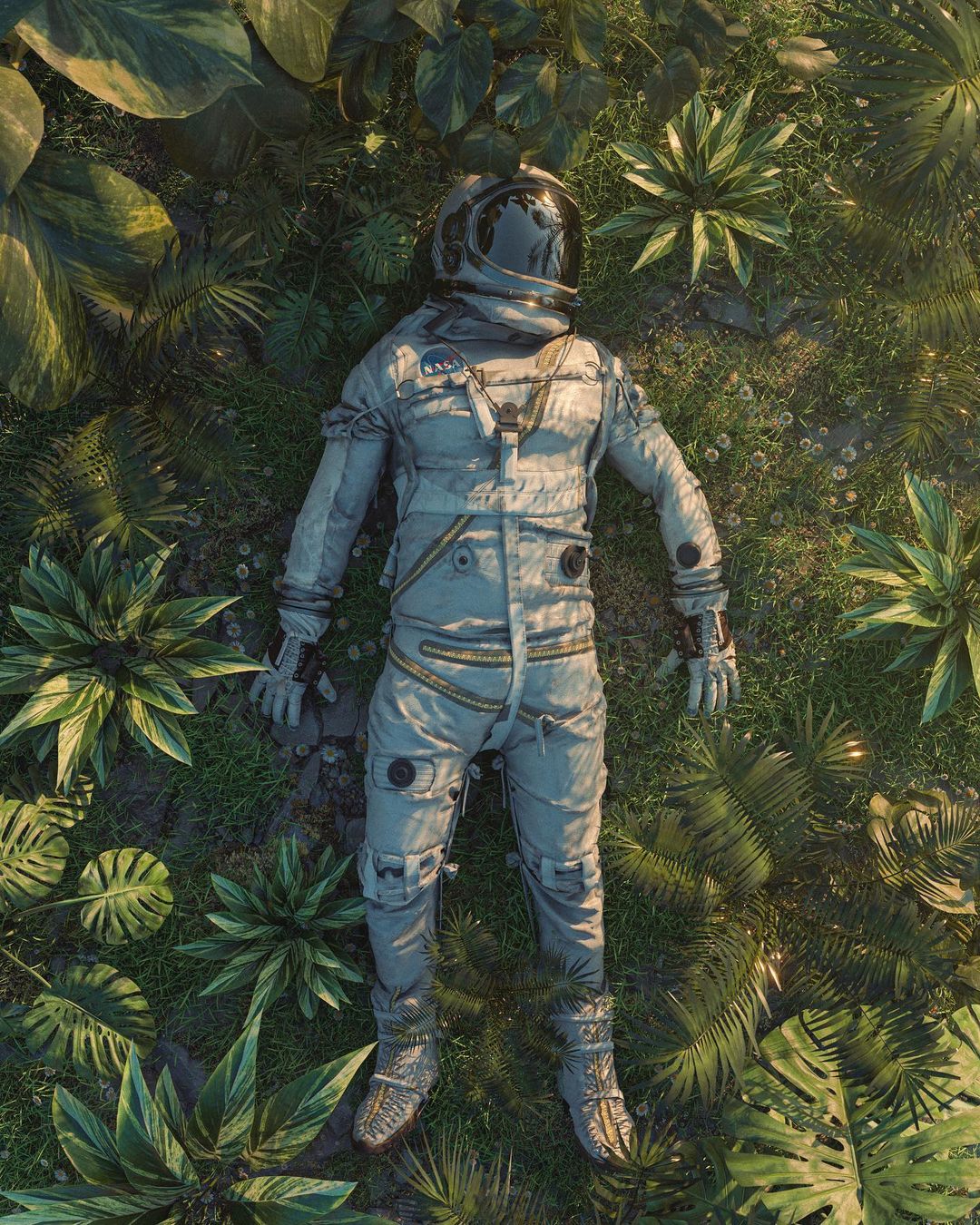 Proverb: Alone a youth runs fast, with an elder slow, but together they go far — Luo proverb 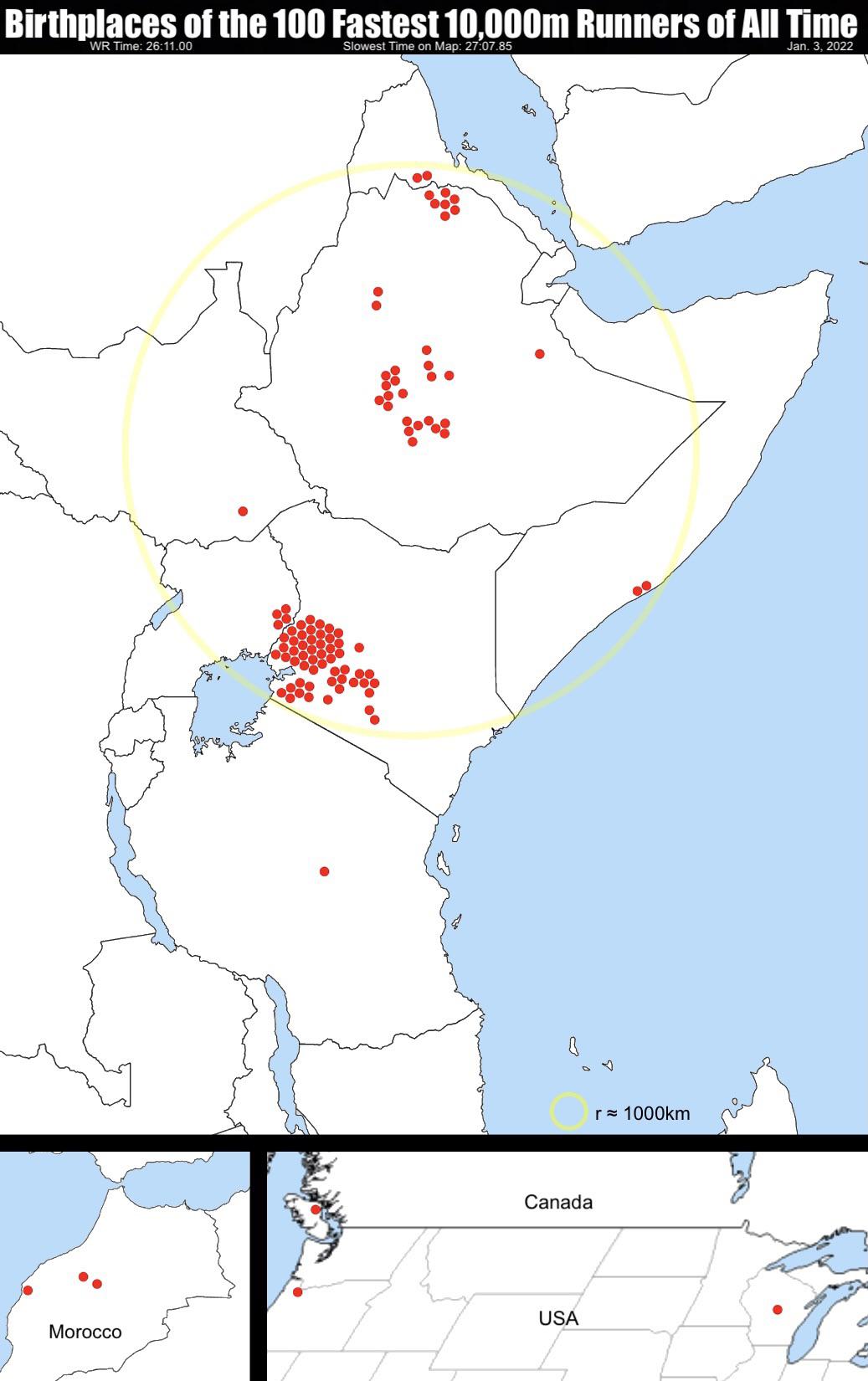