Why Are They Here?

“To speak a language is to take on a world, a culture”

Frantz Fanon said this and quoting him when discussing a film about the very real struggle of conveying meaning, how we deal with ambiguity & stressors and how deeply important language is for governing interactions as well as understanding, may seem natural. When that film is ostensibly a science fiction tale about the arrival of alien life on earth and the events which proceed — the link may at first appear tenuous.

And yet therein lies a particular triumph with Denis Villeneuve’s latest offering “Arrival” — not to be confused with the 1996 Charlie Sheen scifi schlokfest “The Arrival”. Having thoroughly enjoyed Incendies, Prisoners, Enemy and last year’s Sicario — my expectations for Villeneuve’s work (like Iñárritu’s at this point) are now forever inflated, even given the fact he tries his hand at a different genre with every film. Arrival did not disappoint on first viewing and a mandatory rewatch a week later only served to elevate it.

From a story point of view, the setup is all one needs to know going in and I believe trying to expand much beyond this when discussing the narrative is to truly test the spoiler gods. What I will say is that seldom has a movie with this kind of subject matter felt so contained, small and personal. To call it the anti-Independence Day wouldn’t be too far from the truth yet to define it by what it clearly aims not to be — would also be woefully inadequate a description.

Concepts like the question of how we would react as people, governments & society at large to news as shocking and compelling as the confirmation of extraterrestrial intelligent life, it’s sudden arrival on our doorstep and how we would go about trying to communicate with it — are dealt with deftly, subtly and with a bias towards realism. The story is told largely from the perspective of Louise Banks, played by a superlative but understated Amy Adams who is the expert linguist tasked with leading the US effort to communicate with these beings. Our extraterrestrial visitors appear all over the world (not over the Eiffel Tower or the Sydney Opera House for effect either) and a large part of the story is how the many disparate nations each reach out to them and also how they relate to each other during this time. 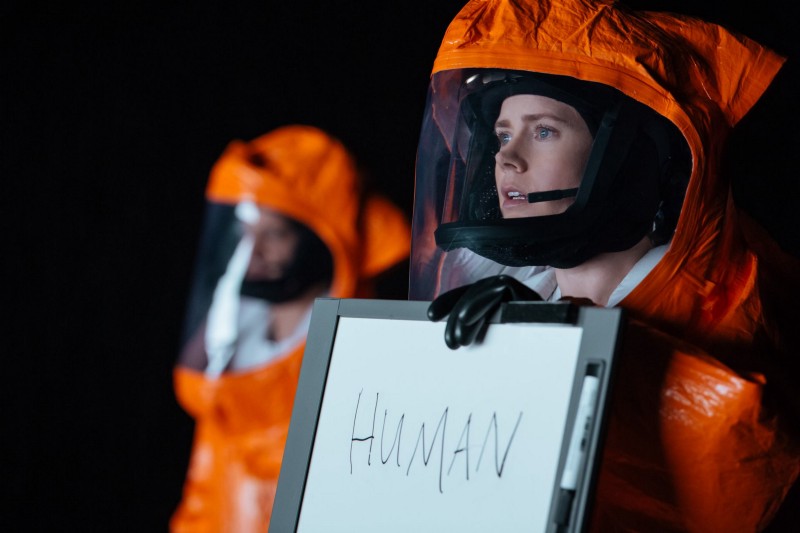 As a study of communication, the power of language and the absolute importance of being able to understand those whose views and ideas may seem — quite literally — alien, its timing was excellent in light of Brexit, Trump as well as the growing divide between Left & Right, Privileged & Disadvantaged and those who extol Globalism versus Nationalism. As a study of the effects of deeply understanding a different culture and how this can have profound effects on one’s own sense of self as well as change one’s thinking, it is equally important. Finally, as a character study of time’s effect on love, personal relationships and how single moments can come to define one’s whole life — it also functions beautifully.

Although Denis couldn’t work with Roger Deakins as his Director of Photography again on this one (the camera is helmed by Bradford Young) — it’s a beautiful looking film, with every frame expertly crafted and no celluloid wasted on the banal or irrelevant. It is deliberately paced and those expecting alien blood & guts, Empire State Building explosions and superhero ensemble assemblages will be gravely disappointed. Those who are keen to see a thoughtful and thought-provoking story told against the backdrop of science fiction are in for a treat.

Forest Whitaker and Jeremy Renner are good, but the real stars of the show are Amy Adams and the folks behind the lens/script, who weave a spellbinding tale which requires commitment from the audience until the very end. No spoon-feeding occurs and the director trusts the audience enough for me to say this is the kind of third act Christopher Nolan could only have dreamt of in his far more bombastic Interstellar.

This was an 8⁄10 for me on first watch. On second watch, for reasons which will only really make sense to you once you’ve seen it — I’m almost obliged to elevate it to a 9⁄10. A Great film, one of my favourite of 2016, from a great director and I cannot wait for his treatment of the Blade Runner remake where he’ll get his hands on some proper Hollywood budget for the first time.

If you get the chance…do yourself a favour and go and check it out. Now, onto Barry Jenkin’s “Moonlight” which I have high hopes for.