It’s always interesting how permanent - or important - the things currently in our lives seem and feel. Yet in just a decade we’ve seen the emergence and main-streaming of a number of enormous and important companies that many would swear they could never live without. A few of the folks who’ve only been with us since 2008⁄2009!

Some have called it the iPhone effect - with many of these companies catering to a mobile & smartphone-first world; others noting that these all emerged in the still-warm embers of the 2008 financial crisis. What we know for sure is that there’s been over $300Bn+ of value creation with these names.

Not sure what part of Youtube I’ve stumbled onto in recent times but it’s been quite something to behold. Metamodernism is here… Video not as morbid as the title would suggest…sort’ve

I was going to write alot here; in fact I did write alot and then decided to delete it all and switched up the presentation…I’m sure you’ve already heard endless amounts of pontification, elucidation, public cogitation and all manner of other -tion ending verb in respect to the Covid-19.

You’ve also probably seen charts. Many many charts. And yet possibly… not enough charts 😅

What I’ll say is that given the WHO coining the term “Infodemic” given the sheer deluge of worldwide misinformation, it’s probably best to try and stick as closely to the numbers (and contextualise them) as best you can.

Here then is a timelapse of confirmed cases based on public infection information over the course of a month, thanks to our friends at Reddit. Note the graph’s scale. Relevant for next section.

When you’re dealing in exponentials, often Logarithmic representation is best as it clearly shows the exponential relationships. Because we humans live in linear-land however, these can often be difficult to parse. Nassim Taleb in his Incerto book series speaks of Mediocristan (land of the linear) and Extremistan (land of the expotential & explosive).

What is often betrayed when listening to people arguing about the dangers (or apparent lack thereof) of Covid-19, is one set of humans speaking from the context of Mediocristan - and the other from Extremistan. These worlds couldn’t be more different, and the numbers suggest Covid-19 math is less casino slot-machine (bell curve statistics… linear relationships… mediocristan) and more hollywood box office / social media (winner takes all dynamics… network effects… extremistan) 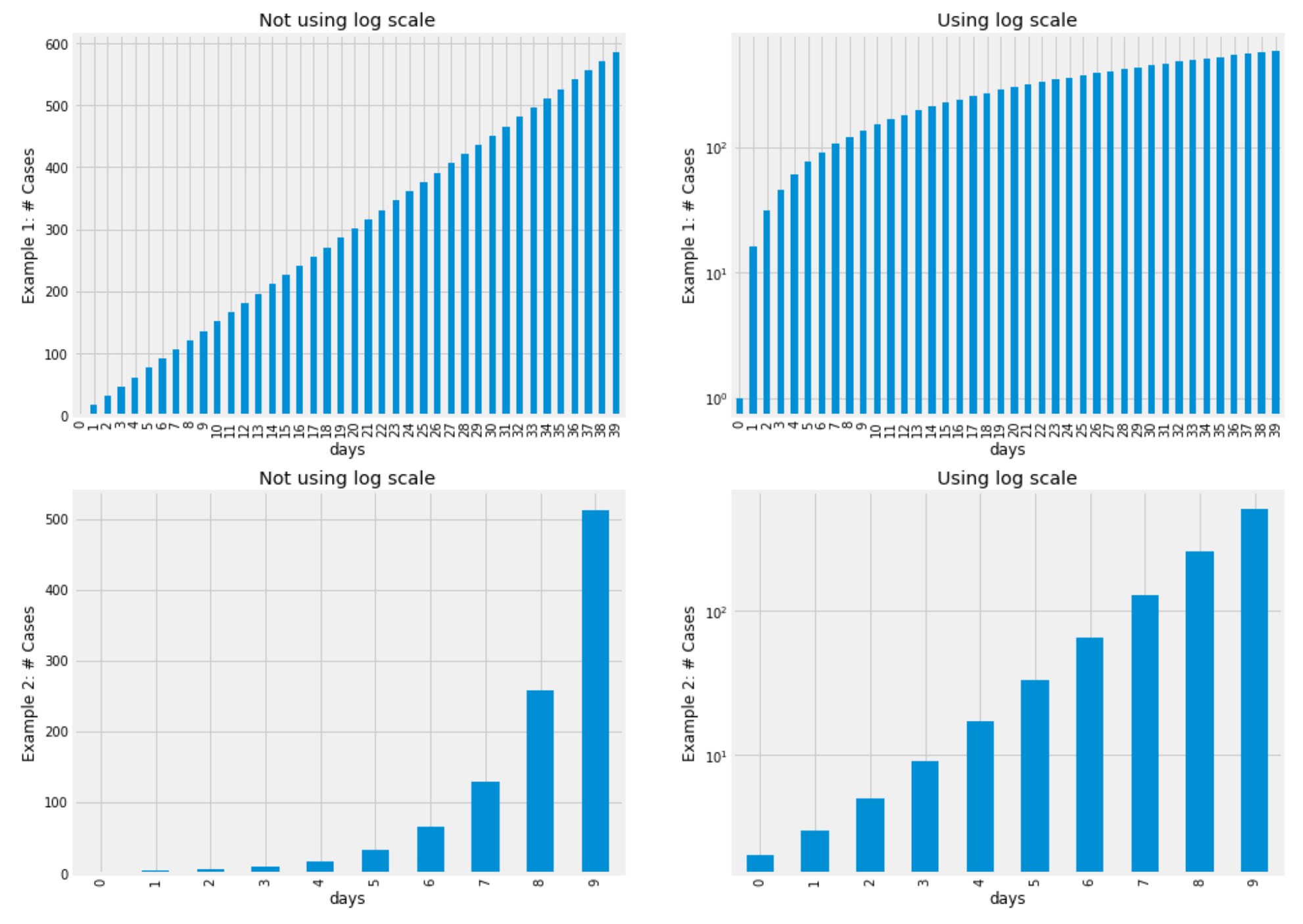 Given the above, this graph presented in Tyler Cowen’s Marginal Revolution Blog - which I picked up on Patrick Collison’s feed shows what the log curves look like for infection. 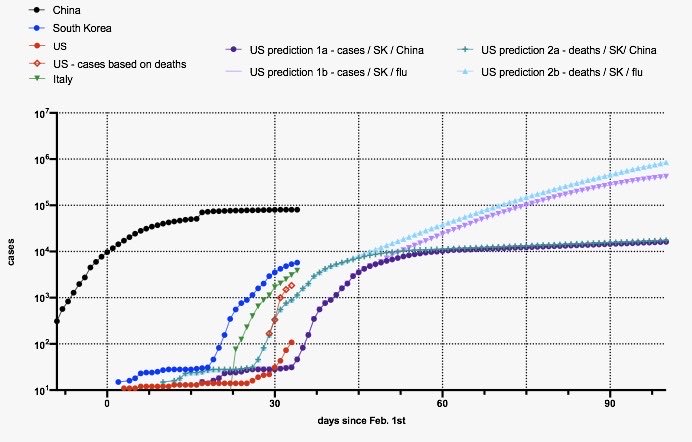 Seems to suggest both the alarming fact of seeming exponential growth & the positive fact of just how much we can affect outcomes with early intervention. What would be interesting to see here would be Singapore - widely seen as the quintessential Covid-19 response by a nation. For instance, how’s this for reportage. You probably couldn’t do similar in most nations on earth for many reasons…including privacy.

I'm stunned by the depth of #coronavirus information being released in #Singapore. On this website you can see every known infection case, where the person lives and works, which hospital they got admitted to, and the network topology of carriers, all laid out on a time-series pic.twitter.com/wckG8KpPDE

Ultimately though, given the profile of who is most at risk - we need to remain sensitive in our words & actions. For example it’s clear who is most at risk, which sometimes lead people to say “ergo if you’re young healthy you’ll be fine, relax”. Undoubtedly true yet what’s that line about the measure of a civilization being how it treats its weakest members? Also it’s clear we’re dealing with a very different mortality rate profile. 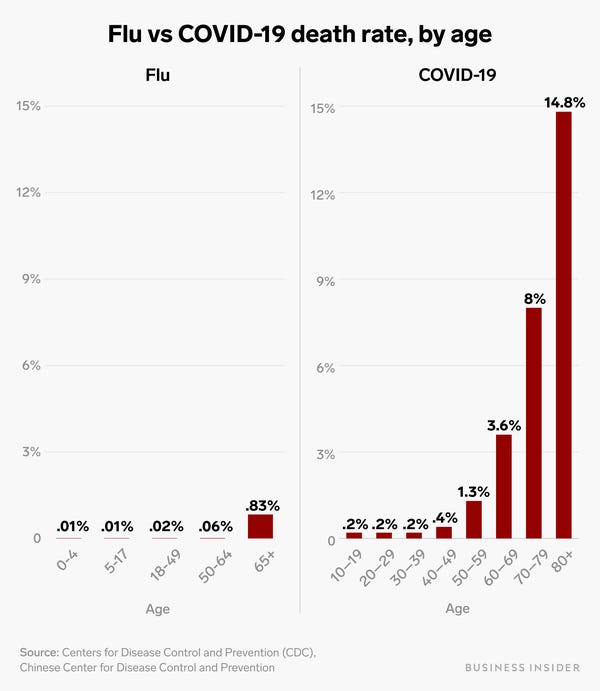 Yet this graph showing just the incidence deltas also has a story to tell. The dance between actual number changes and increases/decreases due to testing is complicated to say the least - so draw only the requisite conclusions.

The Dictator’s handbook: I read this book not too long ago and now going through it again slowly. It’s conclusions are…troubling, yet it’s logic and analysis are definitely sound. Instead of trying to pen a review (as my own thoguhts are still evolving) here’s an absolutely fantastic animated distillation of it’s key points by one of my favourite didactic youtubers CGP Grey:

I’m partial to the late great Christopher Hitchens - and he’s as missed during these culture wars as ever before. I include 3 quotations from him here - with the first being a line of his which really hit home for me in 2019.

“What do you most value in your friends? Their continued existence.”

“The essence of the independent mind lies not in what it thinks, but in how it thinks.”

On a slightly less serious note though, I can confirm the below

If you like a drink, then a Klein bottle is not a recommended receptacle. It may look vaguely like a bottle, but it doesn’t enclose any volume, which means that it can’t actually hold any liquid. Whatever you pour “in” will just come back out again.

You can even order one yourself https://www.kleinbottle.com/index.htm