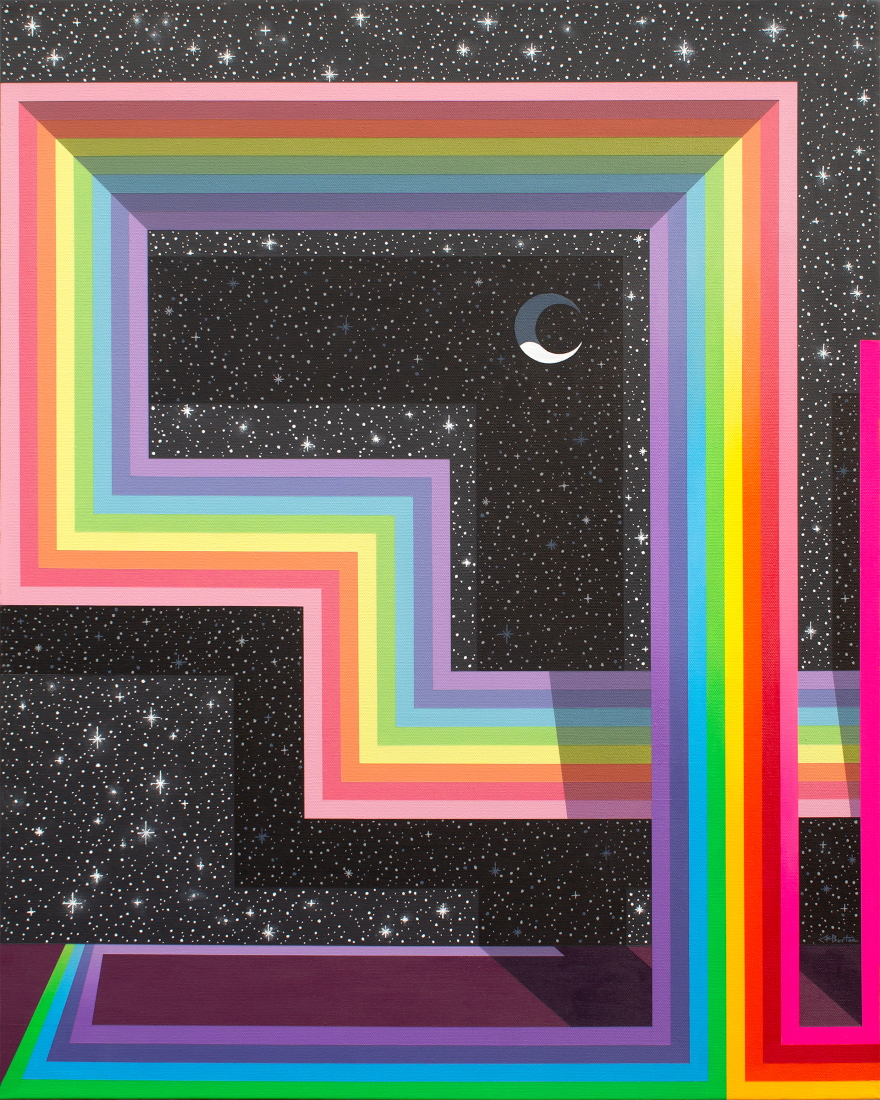 Ever wondered what fonts are used for big brand logos? Graphic Designer Emanuele Abrate put this selection together

Amazing animation shows how humans spread across the globe, ultimately coming to occupy every continent other than Antarctica. https://t.co/CMQoizhaI1 pic.twitter.com/EGZDoAGTxe

On the subject of the pre-history of humanity and the rise of civilisation, I’m currently almost done with a fascinating history book by the now late David Graeber who had been the professor of anthropology at the London School of Economics until his passing in September 2020 - and his co-author David Wengrow.

It’s a complete reimagining of human pre-history and one which incorporates many of the most recent historical, anthropological and archeological findings to paint a picture that is very different from what you get in Jared Diamond’s Guns, Germs and Steel or Yuval Noah Harari’s Sapiens. 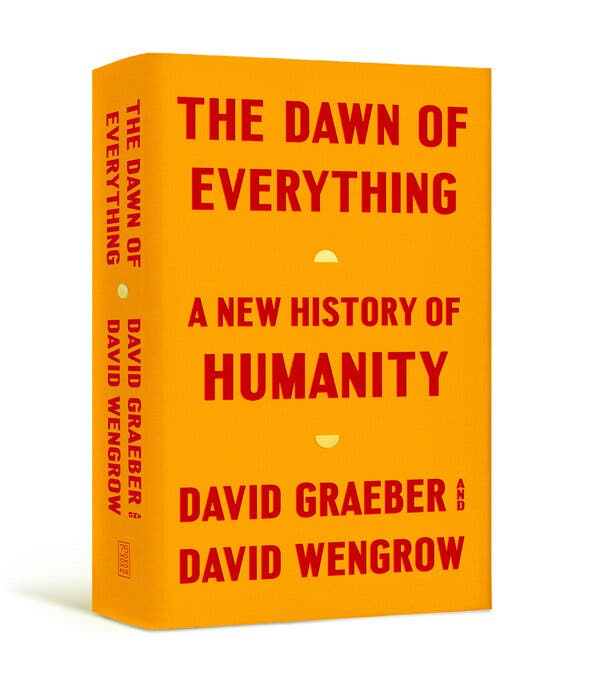 An excerpt from the Goodreads review:

Drawing on pathbreaking research in archaeology and anthropology, the authors show how history becomes a far more interesting place once we learn to throw off our conceptual shackles and perceive what’s really there. If humans did not spend 95 percent of their evolutionary past in tiny bands of hunter-gatherers, what were they doing all that time? If agriculture, and cities, did not mean a plunge into hierarchy and domination, then what kinds of social and economic organization did they lead to? The answers are often unexpected, and suggest that the course of human history may be less set in stone, and more full of playful, hopeful possibilities, than we tend to assume.

The Dawn of Everything fundamentally transforms our understanding of the human past and offers a path toward imagining new forms of freedom, new ways of organizing society. This is a monumental book of formidable intellectual range, animated by curiosity, moral vision, and a faith in the power of direct action.

A really fascinating tome and one which is as mind expanding as Graebers previous magnum opus on the history of money and it’s basis in credit - Debt: The First 5000 Years, which I also highly recommend. 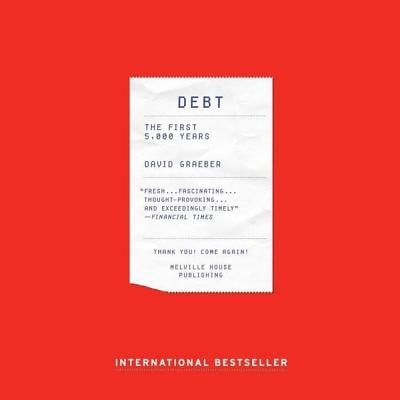 From 📝Africa - The Big Deal: 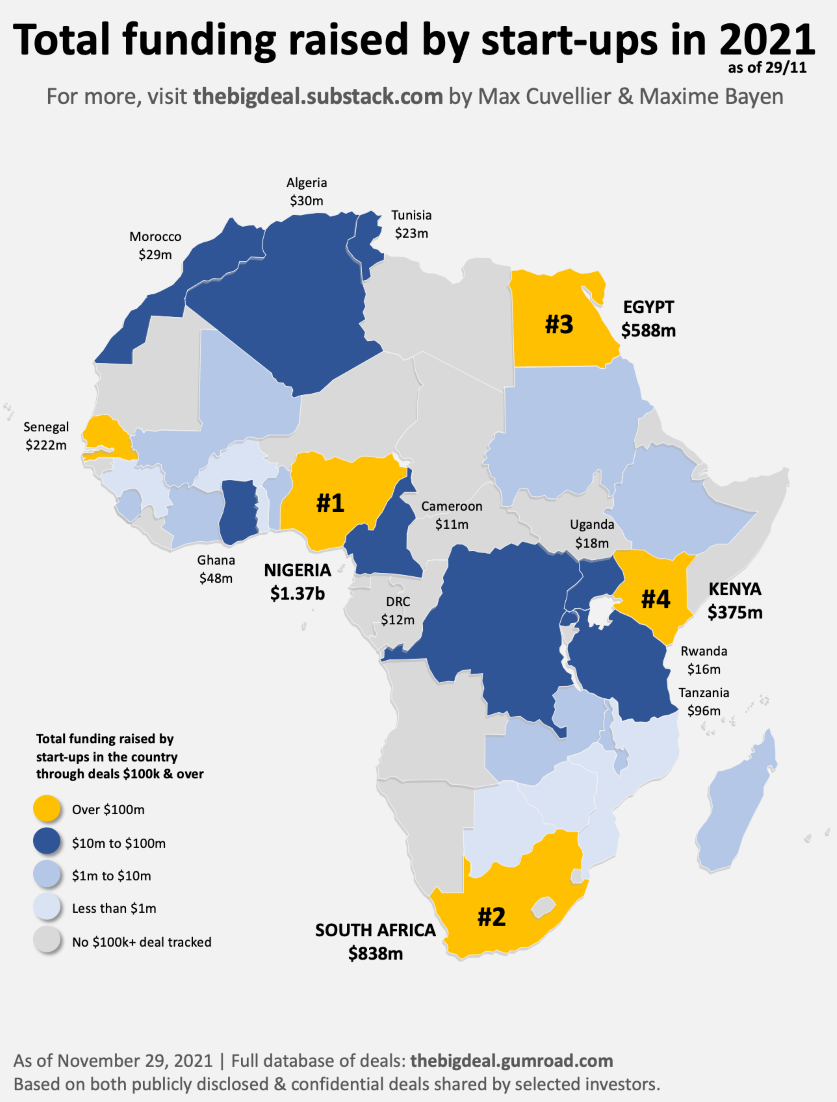 As we wait for the ecosystem to cross the $4b mark in terms of funding raised in $100k+ deals this year (we’re 99% there!), we thought an updated map showing the amount raised per country would be nice… Most of you won’t be too surprised to find the “Big Four” usual suspects (Nigeria, South Africa, Egypt and Kenya) dominate the charts with 80% of the total raised on the continent so far this year (35% for Nigeria alone!). Next in terms of total amount raised are Senegal ($222m) and Tanzania ($96m), with a very big difference compared to the Big Four though: in both cases a single deal represents more than 90% of the total raised this year (Wave and Zola Electric). With 18 and 5 $100k+ deals respectively, they are far behind the Big Four: Nigeria boasts 200+ deals; the other three 100+ deals each. Eight countries on top of Tanzania have seen between $10m and $100m raised in 2021TD, with strong disparities though: for instance, start-ups in Ghana have raised close to 40 deals this year so far, while the $30m raised in Algeria come from one single deal (announced yesterday). You then have an extra nine countries with $1m to $10m raised, followed by a final six with less than $1m raised, often through one single deal - except in Zimbabwe (6 deals) and Botswana (2). Finally, it is worth noting that despite initially allocating Chipper Cash’s $100m + $150m = $250m to Ghana, we have decided not to pin them to a specific country as its Ghanaian and Ugandan co-founders and its African HQs split between Ghana and Kenya make it quite pan-African, which is probably an interesting trend to watch in itself… 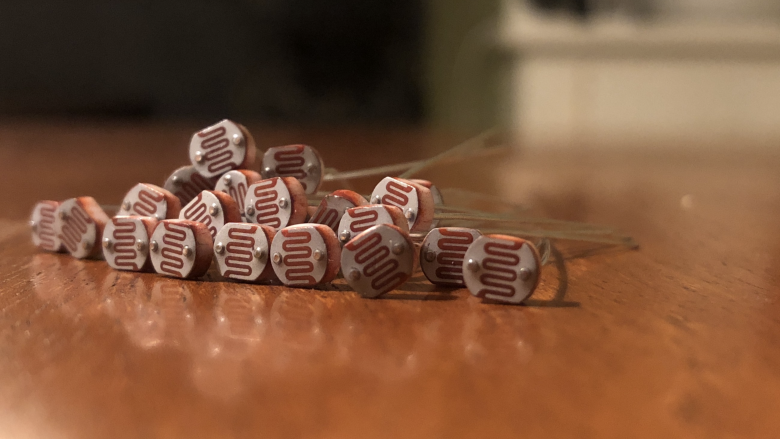 With the year drawing to a close, many of us will be reflecting on the year’s achievements and looking forward to what 2022 has in store (C19-willing). We’re also going to be confronted with many pieces enumerating lessons from the year.

📝Tom Whitwell’s Medium piece is one of the more fascinating, whose all-encompassing loose style is akin to these pages. Some examples:

I think it’s fair to say there’s a clear correlation between C19 transmissability, pathogenics, hospitalisation, morbidity and vaccines. There are now numerous papers pointing to this - including 📚broad-based longitudinal studies.

So this graphic probably shouldn’t come as a surprise. 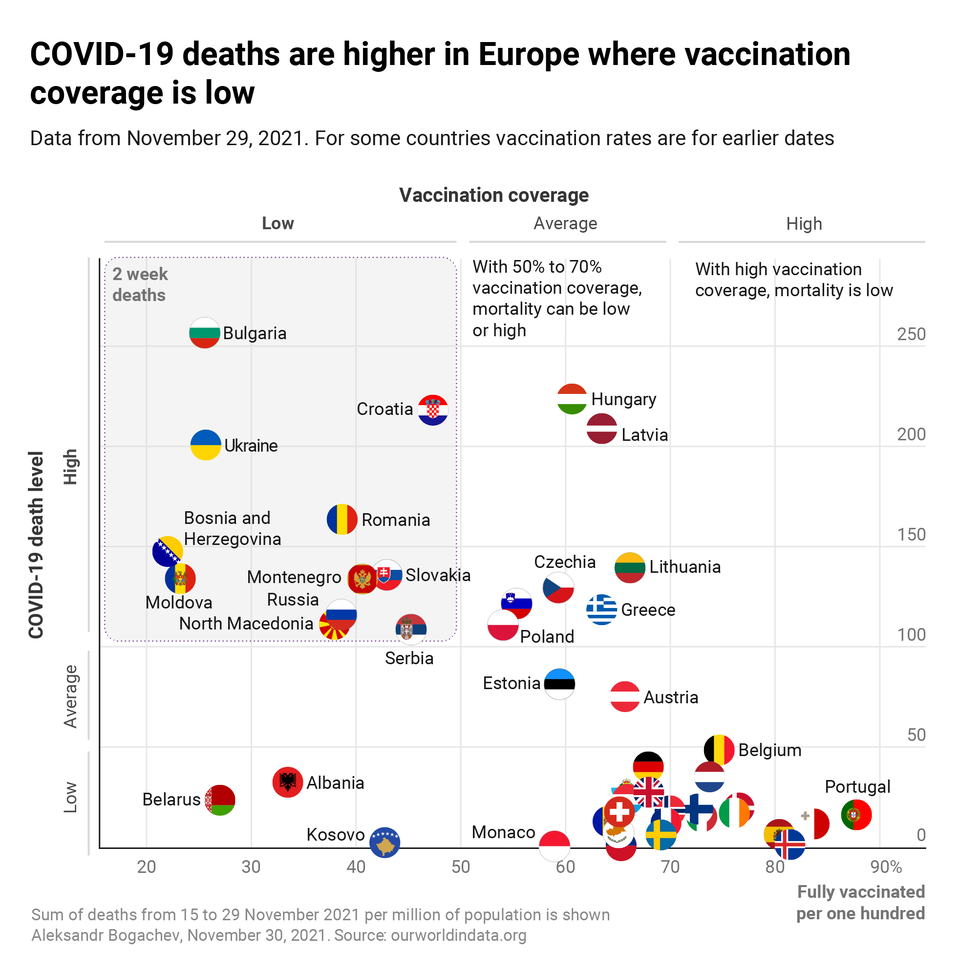 While we’re on the topic, it seems the risk of reinfection from the omicron coronavirus variant is three times higher than for any previous strain, per to 📚a South African study of infections since the start of the pandemic.

My younger son said “coding is basically just ifs and for loops.”

Not many asset classes will have 20% red candles whenever there’s a risk-off event. Bitcoin booked in a $10,000 red wick down as a cascade of margin calls forced massive sales and wiped billions off the market in short order this weekend.

Of course open interest on derivatives had grown to massive levels again, which is often a precursor to a correction - particularly given a rather weak macro environment recently.

At some point, this open interest is going to get flushed out one direction or the other pic.twitter.com/FRCMshQuUY

The above combined with low weekend liquidity and thin orderbooks as well as a positive funding (on perpetual swaps) regime on exchanges for the last while as well as technicals signalling tops and alot of money looking to be taken off the table at any sign of weakness was the perfect storm for the cascade.

That said, on the topic of crypto - here’s Messari’s (slightly in need of another pass by the copy editors) 165 page State of the crypto nation paper,looking at 2022.

📚A paper published in Nature during October described the classic power-law distribution in NFTs with 10% of addresses representing about half of the transaction volume on the relevant blockchains - with the remaining 90% representing the other half.

Inequality, power laws and pareto pop up everywhere… even NFTs. There are a number of other insights in the paper. 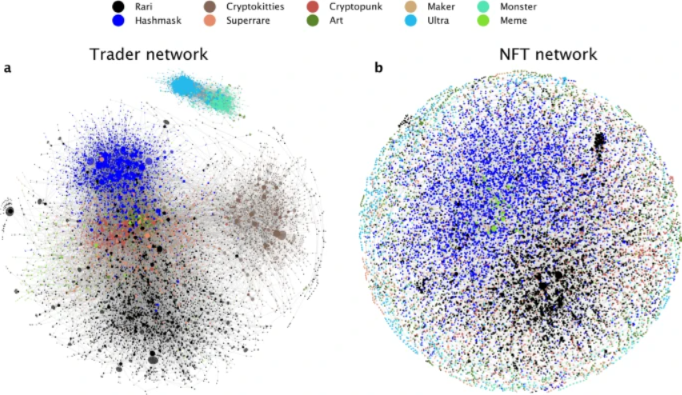 A16Z reposted their podcast about NFTs where theydo a deep-dive episode breaking down everything about these tokens — while cutting through the noise for what’s hype/ what’s real, as well as where we are on the long arc (and sometimes seemingly sudden tipping point!) of innovation.

The mount “cancels out” Earth’s rotation by slowly spinning in the opposite direction. That’s why the stars are stationary and the landscape rotates around the celestial pole. 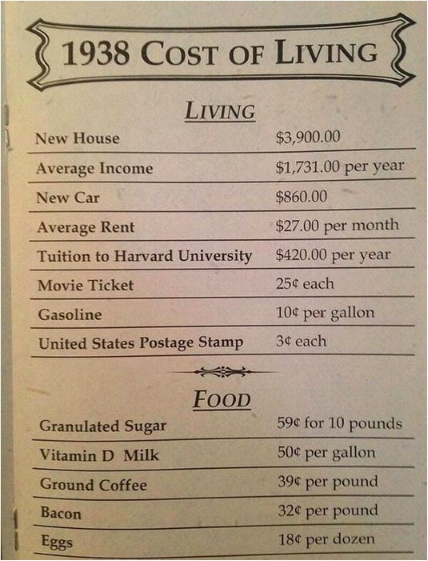 On the inflation topic, Demirti Kofinas from Hidden Forces had an interesting conversation with Jim Grant, who’s lived through at least 3 major credit cycles, about inflation, Fed policy, debasement and the implications for assets like stocks, bonds, cryptocurrency, etc.

From the podcast blurb:

This is a phenomenal conversation that will help you integrate the history of inflation and what we know about its causes into the unique circumstances of our modern political-economy, which is characterized by historically high debt levels, aging demographics, and technology-driven deflation, in a way that can make you a better, more thoughtful investor. 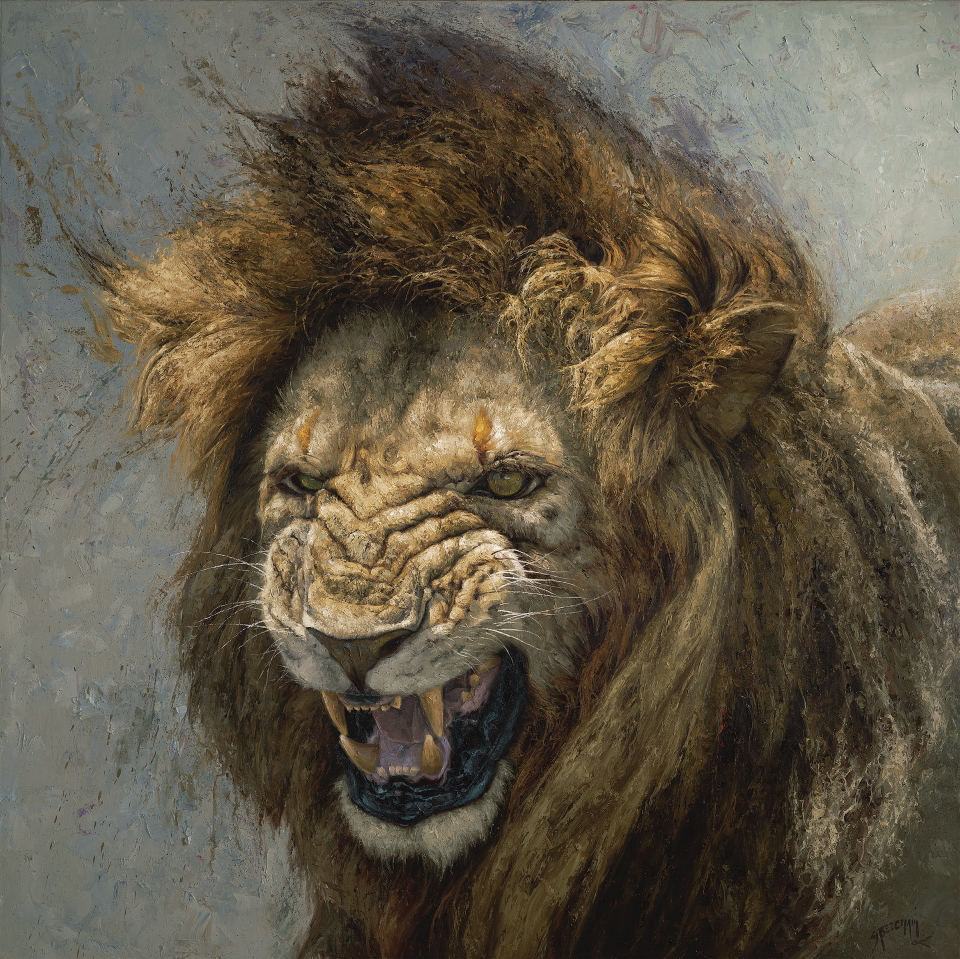 “The ultimate, hidden truth of the world is that it is something that we make, and could just as easily make differently.” ― David Graeber,