Many have seen the below image; the first stunningly clear and deep image captured by the Hubble telescope on April fools 1995, which would come to be known as “The Pillars of Creation”. This star-forming patch of the Eagle Nebula gave us great sight of what star factories look like. 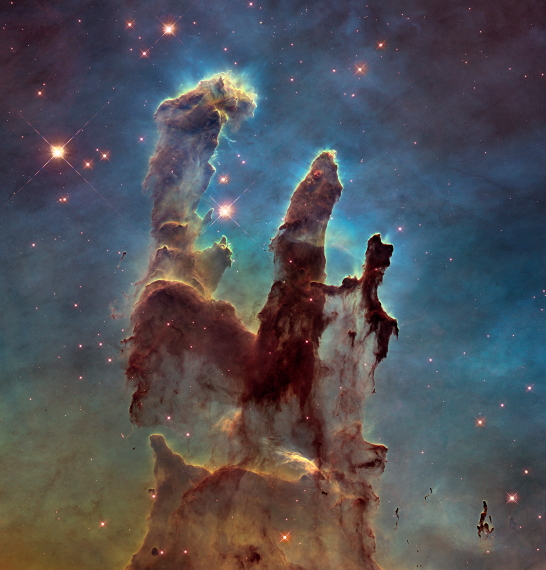 What follows is an extraordinary recent image of a (6 million years young) new star dubbed AB Aurigae being birthed. 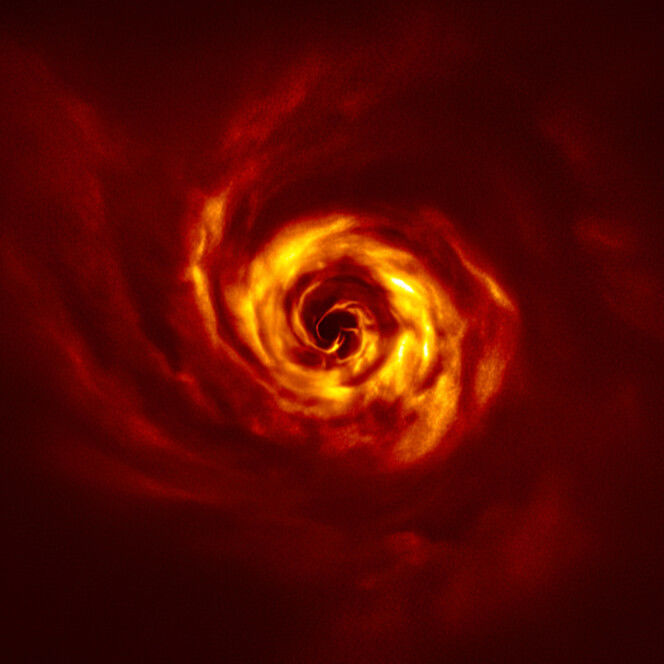 Potentially even more stunning is what we might be seeing in the accretion disk around the nascent “new” sun - the birth of a new exoplanet. This would be the first time the phenomenon was photographed directly.

👋📝 So Long, Beyond the Beyond 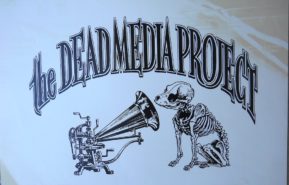 The viral spectre continues stalking the halls of the written word. It’s latest victim - Bruce Sterling’s longstanding and always refreshing “weblog” Beyond the Beyond, Wired’s first blog. Here he writes his final post - a heartfelt goodbye and insight-woven paean. I don’t agree with everything said therein, but it’s too beautifully written not to share.

That, and lines like “I chose the bohemian downsides, the life of archaic niches and avant-garde clutter” truly speak to me.

A few lines from the piece:

“My gift from the police was a lasting, burdensome awareness of dark motives, vulnerabilities and attack surfaces. That’s wisdom, but it costs an eye to get it.”

"We had to destroy the village in order to save it." pic.twitter.com/YpXHUXX5ql

Thiel Capital MD and coiner of the term “intellectual darkweb”, Eric Weinstein has for years now (among many others) been writing about the strange state of what he calls “the gimmick economy” which he purports has been in existence in the “West” now for the last 5 decades or so.

A mathematics PhD, economist and one of the few public intellectuals one can safely label a polymath - Weinstein’s opinions certainly aren’t uninformed. The idea now is that covid-19 has poured jet-fuel on this “gimmick economy” and it’s unclear if another run at sweeping structural issues under an ever larger multi-trillion-dollar QE rug is a great idea.

“In the first place, we should expect that because there is as yet no known alternative to market capitalism, central banks and government agencies publishing official statistics will be under increased pressure to keep up the illusion that market capitalism is recovering by manipulating whatever dials can be turned by law or fiat, giving birth to an interim “gimmick economy”

He unpacked the “gimmick economy” and “Anthropic Capitalism” in this 2016 Edge Questions response. That essay ends with this turn of phrase:

“Capitalism and Communism which briefly resembled victor and vanquished, increasingly look more like Thelma and Louise; a tragic couple sent over the edge by forces beyond their control. What comes next is anyone’s guess and the world hangs in the balance.”

Zambian-raised, US & UK-educated Economist Dambisa Moyo had an interesting discussion with TED creator Chris Anderson - where they discuss issues like overseas aid, climate, democracy and the rise of the coronavirus pandemic.

On Friday May 22nd, Amazon Prime started streaming a documentary which follows the journey of Bitcoin pioneers as the continent seeks to leverage cryptocurrency to leapfrog standing world economic power brokers in various ways.

The crypto story is a persistent and increasingly relevant one on the continent, so much so that after a tour in 2019, BTC proponent and Twitter founder-CEO Jack Dorsey suggested he’d be moving to the continent for 1-2 quarters this year to get closer to the action. Sadly covid19 means that’s unlikely to happen.

Sad to be leaving the continent…for now. Africa will define the future (especially the bitcoin one!). Not sure where yet, but I’ll be living here for 3-6 months mid 2020. Grateful I was able to experience a small part. 🌍 pic.twitter.com/9VqgbhCXWd

With 80-odd teams internationally working on vaccines, the Trump administration declaring “Operation Warp Speed”, the Chinese announcing they’d provide the world with any vaccine they discover and Moderna’s stock spiking after moving beyond the exploratory stage - it’s worth a quick look at the phases vaccines have historially gone through and what that could mean for covid-19.

We noted the “Road to Resilience” paper and illustrated video on these pages a few weeks back. The good thinking around paths to reopening economies and ameliorating the extreme health and economic shocks tends to touch on similar topics.

His own group covidpathforward have used these 14 Key Areas in targeting their policy response recommendations. 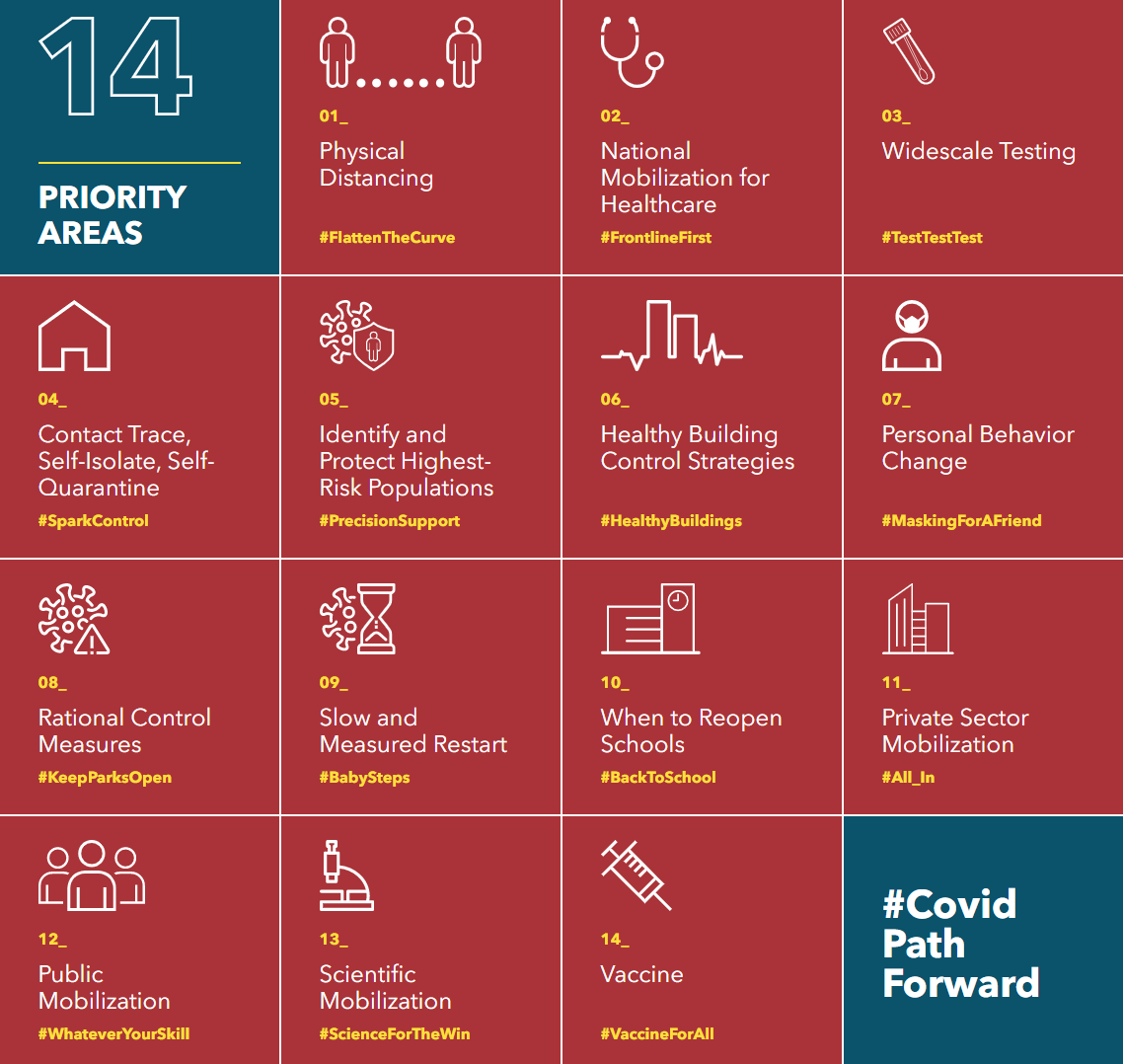 Here are the papers mentioned in the discussion: - Road to Resilience - Roadmap to Recovery - Paul Romer’s $100Bn Per Annum Testing Plan

Eric cracks a second nod this week with his epic 3 and a half hour covid-19 deep-dive with Balaji Srinivasan. Here’s Eric’s description of the conversation - which is highly informative and interesting, albeit often testy.

Investor Balaji Srinivasan is a highly original thinker in Silicon Valley on Biotech to Blockchain and everything in between. Most recently, he was quite early in warning us about the Corona virus and was ridiculed for his efforts by many in the world of institutional sense-making. That is before people realized he was not wrong, but simply early. In this episode Eric talks to Balaji on the topic of what it was like to see the future before it arrived and what his crystal ball suggests about what is likely to happen next. As Balaji understands our world, the Corona virus presents a complex set of challenges that will strongly discriminate between those who can pass it’s tests and those who will fail them. He sees this resulting in functional Green Zones which will become dominant in the future and Red Zones which will be characterized by dysfunctional responses. Presumably this new divide will then be expected to take over from the “North-South” divide between industrialized and developing nations. 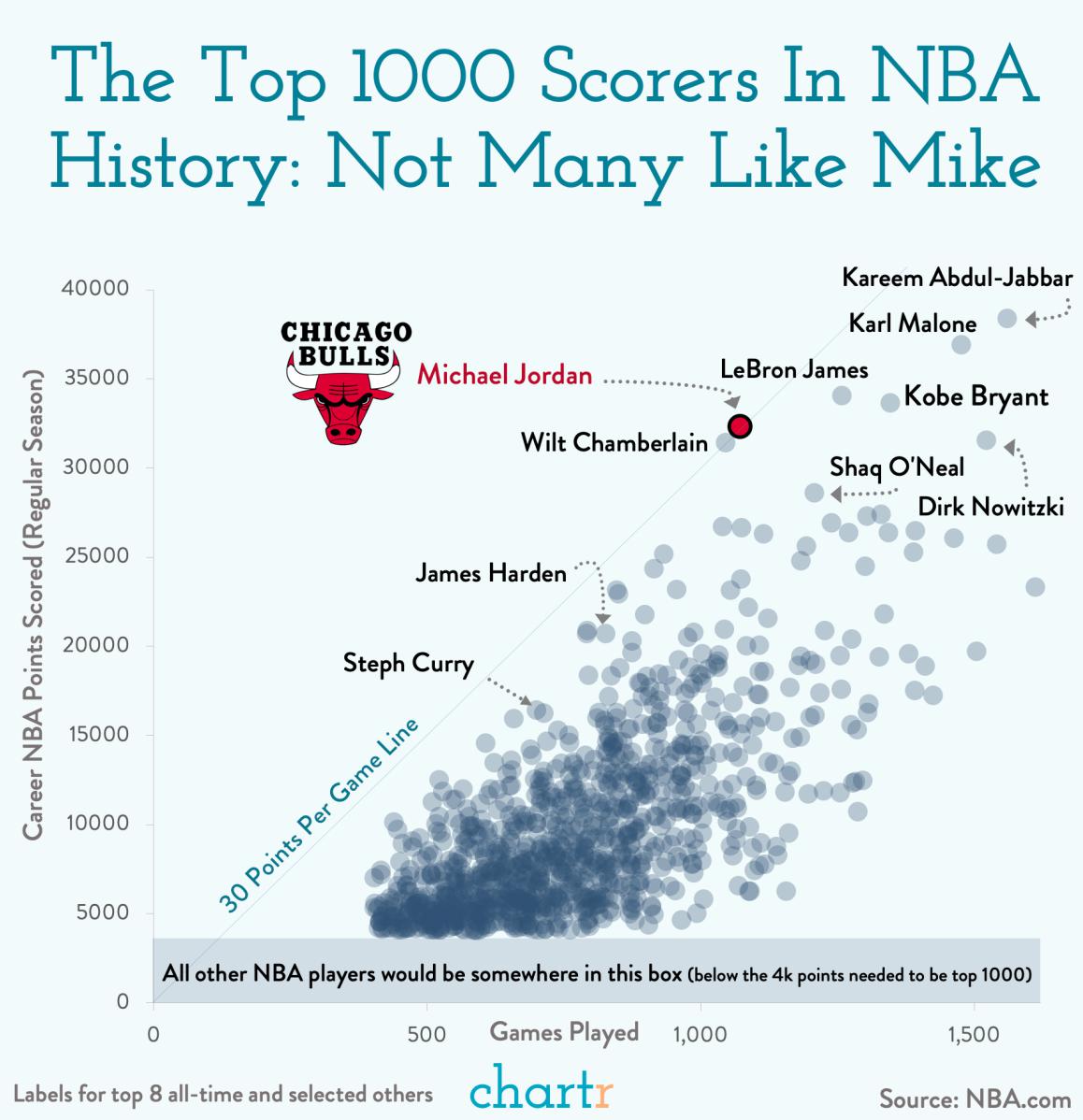 There are some new productions whose coronavirus-lockdown-induced popularity seems to say less about the quality of the production and more about the current state of a captive and distraction-needy audience (a quick zoom through Netflix top lists is testament to this fact).

Then there is the genuine content which may serve a particular niche, but whose quality draws in large diverse international audiences. The 10-part ESPN documentary series looking at the Bull’s dynasty through the lens of the final championship season in 1997-1998 is exactly that kind of high quality content.

Much has already been said, so I’ll limit my contritubion to saying that it is most certainly worth watching, irrespective of background or particular interest in basketball per se.

“The folly of mistaking a paradox for a discovery, a metaphor for a proof, a torrent of verbiage for a spring of capital truths, and oneself for an oracle, is inborn in us.” - Paul Valery

Thanks for reading. Tune in next week. Feel free to share with your network